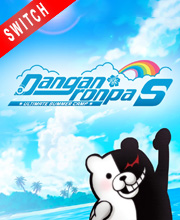 It's a digital key that allows you to download Danganronpa S Ultimate Summer Camp directly to Nintendo Switch directly from Nintendo eShop.

How can I find the best prices for Danganronpa S Ultimate Summer Camp on Nintendo Switch ?

Danganronpa S: Ultimate Summer Camp is a board game spin-off game of the Danganronpa series which borrows its mechanics from an expanded version of the Ultimate Talent Development Plan mini-game from Danganronpa V3 Killing Harmony. Set in an alternate universe of Jabberwock Island, play with an all-star cast from all over the Danganronpa universe, gather money through battling, upgrade your equipment, defeat bosses and move on to the next island. Furthermore, Ultimate Summer Camp also features a new set of character sprites in beachwear, new CGs, and new encounters not featured in the original mini-game, in a number sense, it features 60 characters and a thousand new different character events.

Danganronpa S: Ultimate Summer Camp is all about fanservice. The repeated assets, the reused music from Masafumi Takada (which is still great, by the way), the familiar voice clips, and the recreation of Jabberwock Island are all familiar to fans. There’s a new art and new sprite work throughout, but only a limited amount.

Danganronpa S: Ultimate Summer Camp is a good game for two distinct groups of people: those who went for 100% completion of the adventure game trilogy and those who want an incredibly brief RPG. If you’re in either one of those camps, then it’s worth signing up. Otherwise, stick to the adventure games.

Zoom 1m 3m 1y All
Track product
NINTENDO CODE : This is a digital code for Danganronpa S Ultimate Summer Camp. Use the download code on the Nintendo eShop of your Console. Once connected to the Nintendo eShop, you can enter and redeem the Download Code. Read carefully the store description about any language and region restrictions.
Standard Edition
Compare Choose & Buy Download (759)