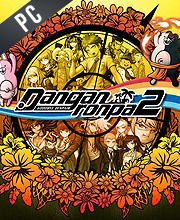 It's a digital key that allows you to download Danganronpa 2 Goodbye Despair directly to PC from the official Platforms.

How can I find the best prices for Danganronpa 2 Goodbye Despair CD keys?

Allkeyshop.com compares the cheapest prices of Danganronpa 2 Goodbye Despair on the digital downloads market to find the best sales and discount codes on trusted stores.

Set in the Jabberwock Island, a remote yet beautiful tropical island. Students of Hope’s Peak Academy were brought here as a simple field trip led by their teacher, a small rabbit-like mascot named Usami. All was going well and everybody was having fun until their principal, a bear-like mascot named Monokuma announces that the students will be stuck in the island forever, unless they kill another student without getting caught. The students will then have a class trial where there will be non-stop debates in defending their arguments.

The game has 2 styles of gameplay: School life and Class Trial. The School Life gameplay has 2 sections. First the Daily Life where the players are allowed to interact with each other, letting the story progress. Second is the Deadly Life, this is when a crime scene is revealed and you must search for evidence that you will be able to use in the class trial. The Class Trial which is the second part of gameplay is when you are all gathered together to discuss who the killer is. You must be keen in determining which is the truth and look for weak points in their deliberation.

STEAM CD KEY : Use the Steam Key Code on Steam Platform to download and play Danganronpa 2 Goodbye Despair. You must login to your Steam Account or create one for free. Download the (Steam Client HERE). Then once you login, click Add a Game (located in the bottom Left corner) -> Activate a Product on Steam. There type in your CD Key and the game will be activated and added to your Steam account game library.
EU STEAM CD KEY: Requires an EUROPEAN IP address or you must activate it with a VPN (Virtual Private Network) in order to play Danganronpa 2 Goodbye Despair. Might have languages restrictions or language packs. Read the description on the store game page to know if the EU IP is only needed for activation or for playing also (maybe on EU Servers). Most of the stores offer you their help, or show you how to do this with a tutorial to follow.
STEAM GIFT : A Steam gift is a one-time transfer you receive. You activate and install Danganronpa 2 Goodbye Despair to play on Steam, it is a non-refundable game that stays in your Steam games collection. Please read the store description about any language or region restrictions.
EUROPEAN STEAM GIFT : It’s a steam gift for Europe which requires an European IP address to activate and to play Danganronpa 2 Goodbye Despair on Steam. Read carefully the store description about region and language restrictions.
STEAM GIFT ROW : This a steam gift for ROW regions. It means for Rest Of the World. This product can't be purchased and activated in Several countries. Please read the store description to know the full list of countries which are concerned.
Standard Edition