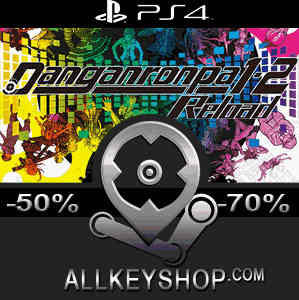 You can participate to these tests by adding comments about your PS4 Game Code purchase in the store review page. Enjoy the best deals for Danganronpa 1-2 Reload Game Code with Allkeyshop !

Danganronpa 1.2 Reload is an action–adventure video game developed and published by Spike Chunsoft. This is actually two games merged into one, the Danganronpa: Trigger Happy Havoc as well as the Danganronpa 2 Goodbye Despair.

Players will get to play both games in higher quality graphics with an addictive with an additional School Mode and Island Mode that will allow you to have more time with the characters as well as date them. Pre-Orders of the game will include a Dangan Radio broadcast that has been unaired with the voice actress Megumi Ogata.

Put your brain and critical thinking to the test with Danganronpa 1.2 Reload!

BOX GAME : This is Danganronpa 1-2 Reload PS4 Box Edition (DVD-CD ROM). This is not a downloadable product. Please read the sellers page for any additional costs (taxes, shipping), delivery time for your country and languages available.
Standard Edition. Read the store description to know the content.

Be the first one to write a review about Danganronpa 1-2 Reload !