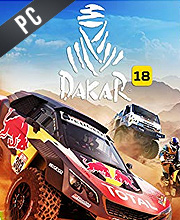 It's a digital key that allows you to download Dakar 18 directly to PC from the official Platforms.

How can I find the best prices for Dakar 18 CD keys?

Allkeyshop.com compares the cheapest prices of Dakar 18 on the digital downloads market to find the best sales and discount codes on trusted stores.

Offering a realistic simulation of the biggest cross-country rally there is. Dakar 18 is based on the yearly rally raid that is organized by Amaury Sports Organization or ASO. There will be five categories to choose from which are: car, motorcycle, quad, truck or UTV.

The game will include a huge cross-country open-world giving players the option to drive across Peru, Bolivia and Argentina. It will also include 14 stages from Lima to Cordoba.

Gameplay is realistic! The graphics are impressive as it has been converted from satellite images from the game terrain. The Road Book Navigation System is realistic as well. There is also a Time and Weather simulation where players can either get stuck in the dry sand under the scorching sun or drive against deep mud during heavy rains. Players can also help out other players that are stuck by towing them and earning extra points.

Get to play as a single player or with multiplayer for both online and offline. Online matches will allow you to race with up to seven other competitors or you can play offline with a friend via split screen, your choice.

STEAM EMEA KEY : What is Steam Key EMEA signification? EMEA means for Europe, Middle East and Africa and several other countries. Please read the store description about country and language restrictions to know which are concerned. Use the key to Download and play Dakar 18 on Steam.
EU STEAM CD KEY: Requires an EUROPEAN IP address or you must activate it with a VPN (Virtual Private Network) in order to play Dakar 18. Might have languages restrictions or language packs. Read the description on the store game page to know if the EU IP is only needed for activation or for playing also (maybe on EU Servers). Most of the stores offer you their help, or show you how to do this with a tutorial to follow.
EUROPEAN STEAM GIFT : It’s a steam gift for Europe which requires an European IP address to activate and to play Dakar 18 on Steam. Read carefully the store description about region and language restrictions.
STEAM CD KEY : Use the Steam Key Code on Steam Platform to download and play Dakar 18. You must login to your Steam Account or create one for free. Download the (Steam Client HERE). Then once you login, click Add a Game (located in the bottom Left corner) -> Activate a Product on Steam. There type in your CD Key and the game will be activated and added to your Steam account game library.
Dayone Edition
Standard Edition

Pick this game as premium and make me win, thanks AKS 😀 <3

hope it will be nice for the price; especialy motobike.
Willl see, nice prices, HF

Dakar used to be great back in history, maybe this game will remember those times.

Dakar 18 is amazing racing game, you can buy it now with good price.

This game seems very realistic. When it comes to these types of game Dakar is at the very top of the genre.