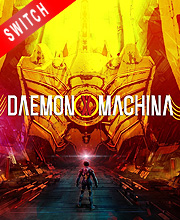 It's a digital key that allows you to download DAEMON X MACHINA directly to Nintendo Switch directly from Nintendo eShop.

How can I find the best prices for DAEMON X MACHINA on Nintendo Switch ?

Allkeyshop.com compares the cheapest prices of DAEMON X MACHINA on the digital downloads market to find the best sales and discount codes on trusted stores.

DAEMON X MACHINA is an action mech game developed by Marvelous Inc. and published by Nintendo for the Nintendo Switch.

Attire yourself in a fully customizable powered suit and arm yourself with a powerful arsenal for a wide variety of missions. Modify your arsenal according to your mission type, rival faction and or play-style. You may also acquire new weapons from fallen enemies and substitute them into your arsenal.