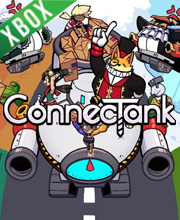 It's a digital key that allows you to download ConnecTank directly to Xbox One from Xbox Live.

How can I find the best prices for ConnecTank on Xbox one?

ConnecTank is cute, fun and a little bit stressful, also reminding me of being at work, only I’m not getting paid. I really like the character of Finneas Fat Cat the XV and the other big wigs that give you gigs to do because of the tongue-in-cheek sense of humor, like when Finneas mentions that he could destroy a scratching post out of frustration.

Zoom 1m 3m 1y All
Track product
XBOX ONE GAME CODE : Use the Digital Code received by mail in your Xbox One account to download ConnecTank from the Xbox Live. Internet connection is required. Please read the store description about any language or region restrictions.
Standard Edition
Compare Choose & Buy Download (743)