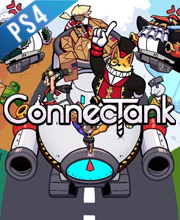 It's a digital key that allows you to download ConnecTank directly to Playstation 4 from PSN (Playstation network).

ConnecTank is one of those games that will easily fly under many gamers’ radars even though it’s a ridiculous amount of fun, especially if you play it with a friend. So, if you enjoy frantic co-op formulas then this is a definite must-play.