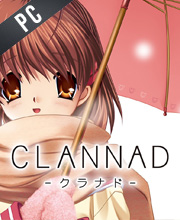 What is CLANNAD CD key?

It's a digital key that allows you to download CLANNAD directly to PC from the official Platforms.

How can I find the best prices for CLANNAD CD keys?

Allkeyshop.com compares the cheapest prices of CLANNAD on the digital downloads market to find the best sales and discount codes on trusted stores.

CLANNAD is an adventure, drama, romance visual novel developed by VisualArts and Key and published by Sekai Project. This is the third game that came from Key, Kanon was the first and Air was the second.

You will assume the role of a delinquent student of Hikarizaka High School named Tomoya Okazaki. Okazaki has had a hard life ever since the death of his mother. His father became addicted to gambling and drinking and became abusive towards him. Okazaki’s direction in life was not clear at all.

One morning while on his way to school, he meets a soft-spoken girl named Nagisa Furukawa. She is a delinquent as well but only because she had to repeat her last year in school due to absences because of sickness.

She is a mild mannered girl with low self-esteem and low self-confidence. Her greatest dream was to be in a drama club. She enlists the help of Okazaki, and with nothing to do, Okazaki accepts.

CLANNAD is a visual novel so expect the majority of the gameplay to be reading the game’s storyline. The game doesn’t follow just one linear storyline, but a branching plot line that will give you multiple endings depending on what you do or say throughout the game. CLANNAD will also have two story arcs. The first is School Life and the second is After Story.

Join Okazaki as he tried to find meaning in his life while making friends with other students and going for their heart’s endeavors.

STEAM CD KEY : Use the Steam Key Code on Steam Platform to download and play CLANNAD. You must login to your Steam Account or create one for free. Download the (Steam Client HERE). Then once you login, click Add a Game (located in the bottom Left corner) -> Activate a Product on Steam. There type in your CD Key and the game will be activated and added to your Steam account game library.
EUROPEAN STEAM GIFT : It’s a steam gift for Europe which requires an European IP address to activate and to play CLANNAD on Steam. Read carefully the store description about region and language restrictions.
STEAM GIFT : A Steam gift is a one-time transfer you receive. You activate and install CLANNAD to play on Steam, it is a non-refundable game that stays in your Steam games collection. Please read the store description about any language or region restrictions.
Bundle. Read the store description to know the content.
Standard Edition. Read the store description to know the content.

Be the first one to write a review about CLANNAD !

My favourite visual novel / anime ever
Nagisa Furukawa is the best girl,change my mind.