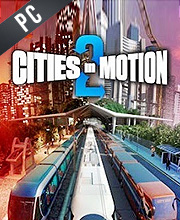 What is Cities in Motion 2 CD key?

It's a digital key that allows you to download Cities in Motion 2 directly to PC from the official Platforms.

How can I find the best prices for Cities in Motion 2 CD keys?

Allkeyshop.com compares the cheapest prices of Cities in Motion 2 on the digital downloads market to find the best sales and discount codes on trusted stores.

Cities in Motion 2 is a strategy game developed by Colossal Order Ltd. and published by Paradox Interactive.

While building empires by conquering enemies is a popular style strategy game Cities in Motion takes a look at it from a different perspective. Instead of building cities and defending against enemies you will be building the infrastructure that supports those cities and allows them to grow.

Busses, trains ferries and many more vehicles and modes of transportation are at your disposal to control the influx and flow of people from the country to the city and from city to city. With different options and control over the cost of transportation you can control which areas a wealthier class may settle or where middle and lower class people are more likely to commute from.

While epic battles and defeating a massive horde of savages for lands may be exciting there is definitely a sense of satisfaction in watching your city and community grow within itself based on the decisions you make. How will you envision your city maturing and will you have the foresight to anticipate small or great changes in population?

EU STEAM CD KEY: Requires an EUROPEAN IP address or you must activate it with a VPN (Virtual Private Network) in order to play Cities in Motion 2. Might have languages restrictions or language packs. Read the description on the store game page to know if the EU IP is only needed for activation or for playing also (maybe on EU Servers). Most of the stores offer you their help, or show you how to do this with a tutorial to follow.
STEAM CD KEY : Use the Steam Key Code on Steam Platform to download and play Cities in Motion 2. You must login to your Steam Account or create one for free. Download the (Steam Client HERE). Then once you login, click Add a Game (located in the bottom Left corner) -> Activate a Product on Steam. There type in your CD Key and the game will be activated and added to your Steam account game library.
STEAM KEY ROW : It means for Rest Of the World countries which are not concerned by the region restrictions. This product can't be purchased and activated in Several countries. Please read the store description to know the full list of countries which are concerned. Use the key to Download and play Cities in Motion 2 on Steam.
Bundle
Collection
Complete Edition
Standard Edition

This game is ok, for this price is good option for start gestional game

G2A and Kinguin offer very cheap keys for Cities in Motion 2 as of Dec. 30, more so G2A if you’re paying with CC.