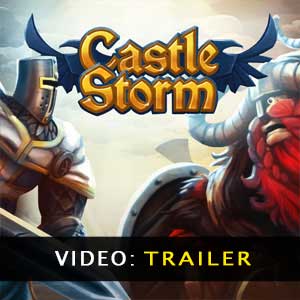 What is CastleStorm CD key?

It's a digital key that allows you to download CastleStorm directly to PC from the official Platforms.

How can I find the best prices for CastleStorm CD keys?

Allkeyshop.com compares the cheapest prices of CastleStorm on the digital downloads market to find the best sales and discount codes on trusted stores.

CastleStorm is a action strategy game developed and published by Zen Studios.

In this delightful projectile based game you are in command of a tower and the objective is to knock down and defeat the defenders of a neighboring tower. You will be given the choice of whether to play as a knight or a Viking. Very similar to the game Angry Birds but with much better graphics and more defense and attack options.

You will be given the opportunity to launch boulders fire arrows or deploy ground troops on your neighbors tower. In addition to and offensive strategy you will also have to prepare on a defensive end as the neighboring tower launches and deploys troops against you.

While this game can have a slightly cartoonish and comical look to it sometimes it only adds to the delight in conquering the opposition whether it be collapsing a tower of decimating an approaching enemy. Do not take the playful graphics to mean that this game is not going to be a challenge. You will be solely responsible for ensuring the defense of your tower and organizing strategic attacks.

A exciting aspect of this game is the ability to play in solo mode or in cooperative play allowing you and a friend to take charge of different areas of your towers defense and attacks.

STEAM GIFT : A Steam gift is a one-time transfer you receive. You activate and install CastleStorm to play on Steam, it is a non-refundable game that stays in your Steam games collection. Please read the store description about any language or region restrictions.
STEAM CD KEY : Use the Steam Key Code on Steam Platform to download and play CastleStorm. You must login to your Steam Account or create one for free. Download the (Steam Client HERE). Then once you login, click Add a Game (located in the bottom Left corner) -> Activate a Product on Steam. There type in your CD Key and the game will be activated and added to your Steam account game library.
Complete Edition
Standard Edition