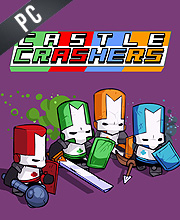 What is Castle Crashers CD key?

It's a digital key that allows you to download Castle Crashers directly to PC from the official Platforms.

How can I find the best prices for Castle Crashers CD keys?

Allkeyshop.com compares the cheapest prices of Castle Crashers on the digital downloads market to find the best sales and discount codes on trusted stores.

Castle Crashers is a 2D side-scrolling action–adventure beat-em-up RPG developed and published by The Behemoth.

The game takes place in a fictional medieval universe where a dark wizard steals a magical gem and captured four pricesses. The king charged four knights to rescue the princesses, take back the stolen game, and bring the evil wizard to justice.

The game can be played either through LAN or online, and up to four players can play the game and rescue the princesses at the same time. It includes more than 25 characters and more than 40 weapons which you can unlock. New attacks (combo and magic) for your character can also be unlocked as you progress through the game.

You also get to adjust your character’s Strength, Magic, Defense and Agility as you level up. You will also have company to go along with you, thanks to the adorable animal orbs which will also be of great help in your journey.

The game also allows you to test your character’s skills through various game modes. The Arena Mode will allow you to battle other players in free-for-all or team matches. Be the ultimate campaign champion and take on the Insane Mode. A mini game is also included as a plus in the game.

EUROPEAN STEAM GIFT : It’s a steam gift for Europe which requires an European IP address to activate and to play Castle Crashers on Steam. Read carefully the store description about region and language restrictions.
STEAM GIFT : A Steam gift is a one-time transfer you receive. You activate and install Castle Crashers to play on Steam, it is a non-refundable game that stays in your Steam games collection. Please read the store description about any language or region restrictions.
STEAM CD KEY : Use the Steam Key Code on Steam Platform to download and play Castle Crashers. You must login to your Steam Account or create one for free. Download the (Steam Client HERE). Then once you login, click Add a Game (located in the bottom Left corner) -> Activate a Product on Steam. There type in your CD Key and the game will be activated and added to your Steam account game library.
Standard Edition