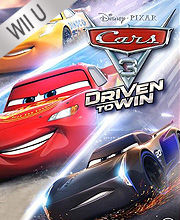 What is Cars 3 Driven to Win Game Code?

It's a digital key that allows you to download Cars 3 Driven to Win directly to Nintendo Wii U from Nintendo eShop.

How can I find the best prices for Cars 3 Driven to Win on Wii U ?

Allkeyshop.com compares the cheapest prices of Cars 3 Driven to Win on the digital downloads market to find the best sales and discount codes on trusted stores.

Cars 3 Driven to Win is a racing game published by WB Games and developed by Avalanche Software for the Nintendo Wii U.

In this game you get to play with over 20 customizable characters from the motion picture including Lightning McQueen, Jackson Storm, Cruz Ramirez and the next generation of racers. There are over 20 tracks set in iconic locations from the movie like Radiator Springs. Your goal is to train and advance your abilities in the six game modes provided. Once you have molded your skill to a capable level, challenge your family and friends in the Battle Race to be crowned the Ultimate Champion.

Zoom 1m 3m 1y All
Track product
NINTENDO CODE : This is a digital code for Cars 3 Driven to Win. Use the download code on the Nintendo eShop of your Console. Once connected to the Nintendo eShop, you can enter and redeem the Download Code. Read carefully the store description about any language and region restrictions.
Standard Edition
Compare Choose & Buy Download (759)