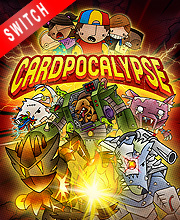 What is Cardpocalypse Game Code?

It's a digital key that allows you to download Cardpocalypse directly to Nintendo Switch directly from Nintendo eShop.

How can I find the best prices for Cardpocalypse on Nintendo Switch ?

Allkeyshop.com compares the cheapest prices of Cardpocalypse on the digital downloads market to find the best sales and discount codes on trusted stores.

Jump in the adventure with 10-year-old Jess and her friends. Everyone in her school is obsessed with a card game based on the hit show called ‘Mega Mutant Power Pets’. The kid’s obsession with the game is a little too much that the adults decided to ban the game.

You, however, can still play as long as the grown-ups are not around. Something strange is happening though because the monsters from the game are actually showing up in your school. You must save your friends and possibly the world, so you challenge the monsters to a game of cards.

The story is cute, and Jess’s anxiety over fitting in at her new school, coupled with trying her best to include other kids that don’t seem to have many friends is really very heartwarming.

Cardpocalypse as a game is a fantastic adventure and time well spent.

Cardpocalypse – Out Of Time includes a standalone campaign where you can test your card gaming skills against other new enemy champions.

Zoom 1m 3m 1y All
Track product
NINTENDO CODE : This is a digital code for Cardpocalypse. Use the download code on the Nintendo eShop of your Console. Once connected to the Nintendo eShop, you can enter and redeem the Download Code. Read carefully the store description about any language and region restrictions.
Standard Edition
Compare Choose & Buy Download (772)

Join 10-year-old Jess and her friends on the worst day ever. Everyone in school is obsessed with ‘Mega Mutant Power Pets’, the hit card game based on their favorite show! A little too obsessed – the grown ups have just BANNED the game. Uh oh.