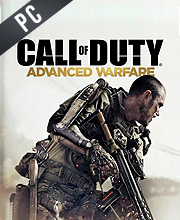 What is Call of Duty Advanced Warfare CD key?

It's a digital key that allows you to download Call of Duty Advanced Warfare directly to PC from the official Platforms.

How can I find the best prices for Call of Duty Advanced Warfare CD keys?

Allkeyshop.com compares the cheapest prices of Call of Duty Advanced Warfare on the digital downloads market to find the best sales and discount codes on trusted stores.

Call of Duty: Advanced Warfare is one of Activision Games’ more famous first-person shooters. It caught the eyes of most gamers and became a personal favorite of some. The game was released on November 4, 2014, along with a newly upgraded multiplayer system and the Exo-Zombies mode.

Call of Duty: Advanced Warfare became the future of FPS games (literally), where both technology and tactics have met halfway and ushered a new era for the whole CoD franchise. The game’s futuristic single-player campaign follows Jack Mitchell of the United States Marine Corps and his interactions with Atlas, a private military corporation that sells its services to the highest bidder. The game takes place in a chaotic future in which technology, telekinesis and obscure military practices have utterly put the world in chaos.

Go prepare your combat exoskeletons that are so advance it reads your battle readiness, enabling you to deploy with an advanced lethality and eliminating the need for specialization. It features enhanced player movement and verticality through boost jumps and grappling, covert cloaking abilities, and biomechanics that provide keen strength, awareness, endurance, and speed. With the introduction of the exoskeleton and newly advanced armor and weaponry, every soldier commands tactical freedom in all terrains making them more deadlier than ever.

EU STEAM CD KEY: Requires an EUROPEAN IP address or you must activate it with a VPN (Virtual Private Network) in order to play Call of Duty Advanced Warfare. Might have languages restrictions or language packs. Read the description on the store game page to know if the EU IP is only needed for activation or for playing also (maybe on EU Servers). Most of the stores offer you their help, or show you how to do this with a tutorial to follow.
STEAM GIFT : A Steam gift is a one-time transfer you receive. You activate and install Call of Duty Advanced Warfare to play on Steam, it is a non-refundable game that stays in your Steam games collection. Please read the store description about any language or region restrictions.
STEAM CD KEY : Use the Steam Key Code on Steam Platform to download and play Call of Duty Advanced Warfare. You must login to your Steam Account or create one for free. Download the (Steam Client HERE). Then once you login, click Add a Game (located in the bottom Left corner) -> Activate a Product on Steam. There type in your CD Key and the game will be activated and added to your Steam account game library.
EU XBOX ONE GAME CODE : Xbox Live Game Code for EUROPE ONLY. Use the Digital Code received by mail in your Xbox One account to download Call of Duty Advanced Warfare from the Xbox Live. Internet connection is required. Please read the store description about any language or region restrictions.
Day zero Edition
Gold Edition
Pro Edition
Standard Edition
Compare Choose & Buy Download (723)

Call of duty is a guarantee for FPS shooter, nice game.

Fun and interesting and I can not play without them