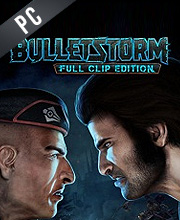 You can participate to these tests by adding comments about your digital download purchase in the store review page. Enjoy the best deals for Bulletstorm Full Clip Edition CD Key with Allkeyshop.com!

Bluestorm: Full Clip Edition is an action adventure video game that also contains nudity, violence, and gore. The game is developed by People Can Fly and published by Gearbox Publishing.

Grayson Hunt is back and so much better than ever in Bluestorm: Full Clip Edition. Grayson Hunt who was once a member of Dead Echo, an elite assassin group and was later exiled. He is then forced to choose between survival or revenge.

He and his team find themselves stranded in an abandoned resort planet called Stygia. Here, he must decide if he wants to survive with his team and get off the planet or to exact revenge on the commander of the assassin group that betrayed him.

Get to battle with the mutated inhabitants of the planet. Offering a single player campaign that includes around 30 competitive score – challenge 12 cooperative multiplayer maps. The game’s “skill shot” system gives players points for getting creative and deadly kills.

The choice is up to you! Is it revenge or survival?

Region
Steam : STEAM CD KEY : Use the Steam Key Code on Steam Platform to download and play Bulletstorm Full Clip Edition. You must login to your Steam Account or create one for free. Download the (Steam Client HERE). Then once you login, click Add a Game (located in the bottom Left corner) -> Activate a Product on Steam. There type in your CD Key and the game will be activated and added to your Steam account game library.


Steam EU : EU STEAM CD KEY: Requires an EUROPEAN IP address or you must activate it with a VPN (Virtual Private Network) in order to play Bulletstorm Full Clip Edition. Might have languages restrictions or language packs. Read the description on the store game page to know if the EU IP is only needed for activation or for playing also (maybe on EU Servers). Most of the stores offer you their help, or show you how to do this with a tutorial to follow.


Steam gift : STEAM GIFT : A Steam gift is a one-time transfer you receive. You activate and install Bulletstorm Full Clip Edition to play on Steam, it is a non-refundable game that stays in your Steam games collection. Please read the store description about any language or region restrictions.


Bundle : Bundle. Read the store description to know the content.

Shame this game never got a sequel, but I’m glad to see it’s still getting attention.

HRK is a pretty decent seller in general, so I’d trust them as the lowest current price for Bulletstorm.

There is currently a great deal on the Bulletstorm Full Clip Edition CD Key at HRK for only 28.80 EURs.

In my opinion, HRK is the cheapest store to buy Bulletstorm 😉