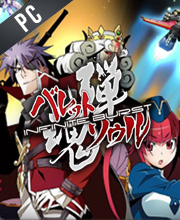 It's a digital key that allows you to download BULLET SOUL INFINITE BURST directly to PC from the official Platforms.

How can I find the best prices for BULLET SOUL INFINITE BURST CD keys?

Allkeyshop.com compares the cheapest prices of BULLET SOUL INFINITE BURST on the digital downloads market to find the best sales and discount codes on trusted stores.

A vertically scrolling shooting game with a bullet hell twist is called Bullet Soul Infinite Burst. Burst Mode is only one of the many gameplay improvements over its predecessor, Bullet Soul. The same violent, bullet-canceling action is still present, but there is more damage, money, and music now.

Whether you are a SHMUP fan or not, Bullet Soul: Infinite Burst will be an addicting time. It’s refreshing to play a game that emphasizes that fun factor, so much so that I really couldn’t find much fault with the game other than the extremely small window in which the action takes place.

Bullet Soul Infinite Burst doesn’t reinvent the bullet hell wheel, but it offers a very approachable game for newcomers, as well as a highly addictive gameplay loop for those who get sucked in. It may not be a classic, but it’s certainly good fun.

Zoom 1m 3m 1y All
Track product
STEAM CD KEY : Use the Steam Key Code on Steam Platform to download and play BULLET SOUL INFINITE BURST. You must login to your Steam Account or create one for free. Download the (Steam Client HERE). Then once you login, click Add a Game (located in the bottom Left corner) -> Activate a Product on Steam. There type in your CD Key and the game will be activated and added to your Steam account game library.
Standard Edition
Compare Choose & Buy Download (772)