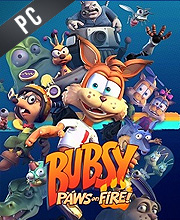 What is Bubsy Paws on Fire CD key?

It's a digital key that allows you to download Bubsy Paws on Fire directly to PC from the official Platforms.

How can I find the best prices for Bubsy Paws on Fire CD keys?

Allkeyshop.com compares the cheapest prices of Bubsy Paws on Fire on the digital downloads market to find the best sales and discount codes on trusted stores.

Bubsy: Paws On Fire! Is an action–adventure video game developed by Choice Provisions and published by Accolade.

Get to save yourself and in the process every animal in the universe. The notorious Oinker P. Hamm has thought of having his very own “Amazootorioum” and he is determined to capture every kind of animal across the universe.

There will be four playable characters across the game, each one having their own mechanics. As the Woolie you will fly and shoot, as Arnold you will be going underground for some bonus levels and as Bubsy and Virgil Realty you will be running your way through success.

Offering over 100 levels found across different worlds, three boss battles, a unique combo system for every character, a unique character dialog, so many collectibles, and a shop that sells different costumes and cosmetics.

Will Oinker P. Hamm achieve his goal, or will Bubsy and his gang put a stop to it? Play Bubsy: Paws on Fire! To find out.

STEAM CD KEY : Use the Steam Key Code on Steam Platform to download and play Bubsy Paws on Fire. You must login to your Steam Account or create one for free. Download the (Steam Client HERE). Then once you login, click Add a Game (located in the bottom Left corner) -> Activate a Product on Steam. There type in your CD Key and the game will be activated and added to your Steam account game library.
Standard Edition