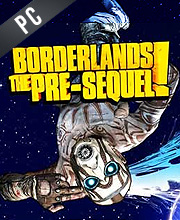 What is Borderlands The Pre Sequel CD key?

It's a digital key that allows you to download Borderlands The Pre Sequel directly to PC from the official Platforms.

How can I find the best prices for Borderlands The Pre Sequel CD keys?

Allkeyshop.com compares the cheapest prices of Borderlands The Pre Sequel on the digital downloads market to find the best sales and discount codes on trusted stores.

Borderlands The Pre-Sequel is a first person shooter video game developed by 2K Australia, assisted by Gearbox software and published by 2K Games. This is the third game to be produced out of the Borderlands series and a sequel to Borderlands 2.

The story focuses on Handsome Jack the villain from Borderlands 2 and how he will rise to power and regain control of Helios as well as defeat the Lost Legion. Also with Handsome Jack will be four playable characters namely: Wilhelm “The Enforcer“, Nisha “The Lawbringer“, Athena “The Gladiator” and Claptrap “The Flagtap”. If you have been a Borderlands fan for quite some time now, you should be familiar with these characters as they all have been non-playable-characters in previous Borderland’s games.

The game play does remain the same with Borderlands 2 but with new additions like laser guns and items with freezing effects on enemies, once frozen you can smash them into bits and pieces. There are also new low gravity environments, that you will definitely enjoy playing around with.

What are you waiting for? Shoot and loot your way through Borderlands The Pre-Sequel!

Zoom 1m 3m 1y All
Track product
EU STEAM CD KEY: Requires an EUROPEAN IP address or you must activate it with a VPN (Virtual Private Network) in order to play Borderlands The Pre Sequel. Might have languages restrictions or language packs. Read the description on the store game page to know if the EU IP is only needed for activation or for playing also (maybe on EU Servers). Most of the stores offer you their help, or show you how to do this with a tutorial to follow.
EUROPEAN STEAM GIFT : It’s a steam gift for Europe which requires an European IP address to activate and to play Borderlands The Pre Sequel on Steam. Read carefully the store description about region and language restrictions.
STEAM GIFT : A Steam gift is a one-time transfer you receive. You activate and install Borderlands The Pre Sequel to play on Steam, it is a non-refundable game that stays in your Steam games collection. Please read the store description about any language or region restrictions.
STEAM CD KEY : Use the Steam Key Code on Steam Platform to download and play Borderlands The Pre Sequel. You must login to your Steam Account or create one for free. Download the (Steam Client HERE). Then once you login, click Add a Game (located in the bottom Left corner) -> Activate a Product on Steam. There type in your CD Key and the game will be activated and added to your Steam account game library.
Bonus Edition
Standard Edition
Standard + Season
Standard + Season pass
Uncut Edition
Compare Choose & Buy Download (759)

The latest game of its series. Great gameplay and great story.

Fun and interesting and I can not play without them

worth buying on sale, awesome game
Pandora is waiting for you 😀

Borderlands The Pre Sequel is cool game …
i want play him and i love like this game …
and thank you .

great game with alot of deals to choose from, worth buying on sale..