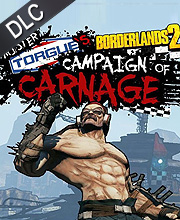 What is Borderlands 2 DLC Torgue's Campaign of carnage CD key?

It's a digital key that allows you to download Borderlands 2 DLC Torgue's Campaign of carnage directly to PC from the official Platforms.

How can I find the best prices for Borderlands 2 DLC Torgue's Campaign of carnage CD keys?

Allkeyshop.com compares the cheapest prices of Borderlands 2 DLC Torgue's Campaign of carnage on the digital downloads market to find the best sales and discount codes on trusted stores.

The distribution of the pay DLCs for Borderlands 2 continues with the arrival of Mr. Torgue’s Campaign of Carnage, a post-apocalyptic game, developed by Gearbox Software and edit by 2 K Games.

Just like its predecessors, including Captain Scarlett, Mr. Torgue’s Campaign of Carnage adds a character with a very special nature like most of those who inhabit this game. The appearance of new levels adapted to this character, he is a great admirer of  short and snappy dialogues not unlike the explosions that he is fond of.

This will make you discover missions sprinkled on the map such as the doors of the arena levels or can show the supremacy on a beautiful line-up of opponents with ever increasing difficulty and above all a pretty interesting to face final boss. The story allows us to discover the region and will keep us in suspense as it is well thought out and fun to follow, thus breaking the monotony that arena sessions could lead to.

In addition, missions will also be a pretext to discover new weapons and the special currency called ‘Torgue tickets‘ from the industry of the same name and giving access to a new specific variety shops dedicated to the image of said company. Sets, while remaining in the main frame of the game, brings a lot of subtleties and individuality to this new character as well as the design of the bosses in the arena. A new DLC for a series that is no shortage of surprise and will extend your enjoyment for several hours with a lot of madness and antics.

Zoom 1m 3m 1y All
Track product
EU STEAM CD KEY: Requires an EUROPEAN IP address or you must activate it with a VPN (Virtual Private Network) in order to play Borderlands 2 DLC Torgue's Campaign of carnage. Might have languages restrictions or language packs. Read the description on the store game page to know if the EU IP is only needed for activation or for playing also (maybe on EU Servers). Most of the stores offer you their help, or show you how to do this with a tutorial to follow.
STEAM GIFT : A Steam gift is a one-time transfer you receive. You activate and install Borderlands 2 DLC Torgue's Campaign of carnage to play on Steam, it is a non-refundable game that stays in your Steam games collection. Please read the store description about any language or region restrictions.
STEAM CD KEY : Use the Steam Key Code on Steam Platform to download and play Borderlands 2 DLC Torgue's Campaign of carnage. You must login to your Steam Account or create one for free. Download the (Steam Client HERE). Then once you login, click Add a Game (located in the bottom Left corner) -> Activate a Product on Steam. There type in your CD Key and the game will be activated and added to your Steam account game library.
STEAM KEY ROW : It means for Rest Of the World countries which are not concerned by the region restrictions. This product can't be purchased and activated in Several countries. Please read the store description to know the full list of countries which are concerned. Use the key to Download and play Borderlands 2 DLC Torgue's Campaign of carnage on Steam.
Collection
Complete Edition
DLC
Game Of The Year Edition
Compare Choose & Buy Download (772)