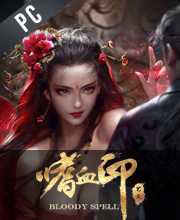 What is Bloody Spell CD key?

It's a digital key that allows you to download Bloody Spell directly to PC from the official Platforms.

How can I find the best prices for Bloody Spell CD keys?

Allkeyshop.com compares the cheapest prices of Bloody Spell on the digital downloads market to find the best sales and discount codes on trusted stores.

The game’s focus is on battles, and it incorporates a variety of fighting styles. If you are a bloodthirsty player who dares to push the envelope, it will undoubtedly boost your adrenaline and provide you the best battle experience.

The Deluxe Edition includes the following:

Zoom 1m 3m 1y All
Track product
EUROPEAN STEAM GIFT : It’s a steam gift for Europe which requires an European IP address to activate and to play Bloody Spell on Steam. Read carefully the store description about region and language restrictions.
STEAM CD KEY : Use the Steam Key Code on Steam Platform to download and play Bloody Spell. You must login to your Steam Account or create one for free. Download the (Steam Client HERE). Then once you login, click Add a Game (located in the bottom Left corner) -> Activate a Product on Steam. There type in your CD Key and the game will be activated and added to your Steam account game library.
Deluxe Edition
Early Access
Standard Edition
Compare Choose & Buy Download (759)

Bloody Spell is an early access RPG game, it has that Dark souls atmosphere, it still needs more polishing, recommended to buy from AKS deals!