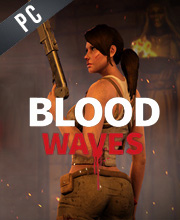 What is Blood Waves CD key?

It's a digital key that allows you to download Blood Waves directly to PC from the official Platforms.

How can I find the best prices for Blood Waves CD keys?

Allkeyshop.com compares the cheapest prices of Blood Waves on the digital downloads market to find the best sales and discount codes on trusted stores.

The objective of this brutal and gory shooter is to fend off attacks from the living dead by employing destructible traps, protective barriers, and close- and long-range combat weapons.

Blood Waves feels like a pale imitation of Resident Evil’s Mercenaries mode. Though the traps players can set add some variety, the lack of character and polish in this title is blatantly apparent.

Zoom 1m 3m 1y All
Track product
STEAM CD KEY : Use the Steam Key Code on Steam Platform to download and play Blood Waves. You must login to your Steam Account or create one for free. Download the (Steam Client HERE). Then once you login, click Add a Game (located in the bottom Left corner) -> Activate a Product on Steam. There type in your CD Key and the game will be activated and added to your Steam account game library.
Standard Edition
Compare Choose & Buy Download (759)