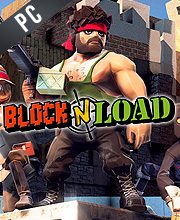 It's a digital key that allows you to download Block N Load directly to PC from the official Platforms.

How can I find the best prices for Block N Load CD keys?

Allkeyshop.com compares the cheapest prices of Block N Load on the digital downloads market to find the best sales and discount codes on trusted stores.

Block N Load is a 5 vs. 5 team-based FPS developed by Jagex and is described as a fusion of Minecraft and Team Fortress 2. You can choose to play 1 hero out of several available in the game. Each character is equipped with an inventory of various block types which they can place all over the game arena. These can range from bounce pads, respawn points, turrets, bombs, and more.

As players decide how the arena is built using their own character’s blocks, no 2 games are the same in Block N Load. Each player’s tactical skills as well as their creativity will be of great use to be able to defeat the other team. There is a Build Phase at the start of the game which gives players the chance to build their own defenses, or setup traps and escape routes before the attack phase begins.

If you’re looking at taking your creativity and tactical skills to the next level, then Block N Load is the perfect game for you.

Zoom 1m 3m 1y All
Track product
STEAM CD KEY : Use the Steam Key Code on Steam Platform to download and play Block N Load. You must login to your Steam Account or create one for free. Download the (Steam Client HERE). Then once you login, click Add a Game (located in the bottom Left corner) -> Activate a Product on Steam. There type in your CD Key and the game will be activated and added to your Steam account game library.
Standard Edition
Compare Choose & Buy Download (791)

i agree with nofes i like the gameplay and graphics , and by the way it’s good deal by allkey.

really interesting game!
It reminds me about minecraft a little bit, i’m happy that there is beta access so i can try it out 🙂 Trailer looks really nice
This time i will use Kinguin to purchase the the! 🙂