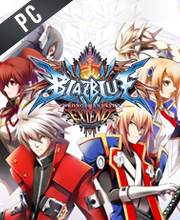 It's a digital key that allows you to download BlazBlue Chronophantasma Extend directly to PC from the official Platforms.

How can I find the best prices for BlazBlue Chronophantasma Extend CD keys?

Allkeyshop.com compares the cheapest prices of BlazBlue Chronophantasma Extend on the digital downloads market to find the best sales and discount codes on trusted stores.

The extended version introduces extra story modes. The new story is based on the BlazBlue Remix Heart, The Rat Determination and Collision that focuses on specific characters like Kagura, Bullet and Kokonoe. Several chances in the game were also made, it came from the new update of the original Chrono Phantasma. The extended game version features single as well as multiplayer modes.

There is a network mode that contains more than 8 worlds. There are 10 lobbies for every world, where a maximum of 64 players per lobby. Player match is also available where the player will have his own “Room”. The player can then design it by using in-game currency and invite other players to battle.

A special mode has also been made available allowing the players to play Chrono phantasma in versus and training modes.

STEAM CD KEY : Use the Steam Key Code on Steam Platform to download and play BlazBlue Chronophantasma Extend. You must login to your Steam Account or create one for free. Download the (Steam Client HERE). Then once you login, click Add a Game (located in the bottom Left corner) -> Activate a Product on Steam. There type in your CD Key and the game will be activated and added to your Steam account game library.
STEAM KEY ROW : It means for Rest Of the World countries which are not concerned by the region restrictions. This product can't be purchased and activated in Several countries. Please read the store description to know the full list of countries which are concerned. Use the key to Download and play BlazBlue Chronophantasma Extend on Steam.
Collection
Standard Edition
Compare Choose & Buy Download (743)