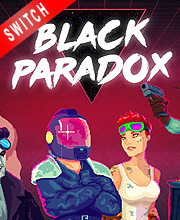 What is Black Paradox Game Code?

It's a digital key that allows you to download Black Paradox directly to Nintendo Switch directly from Nintendo eShop.

How can I find the best prices for Black Paradox on Nintendo Switch ?

Allkeyshop.com compares the cheapest prices of Black Paradox on the digital downloads market to find the best sales and discount codes on trusted stores.

Black Paradox is a fast-paced, arcade, roguelite, platformer, action game published by Digerati Distribution and developed by Fantastico Studio for the Nintendo Switch.

The developers has invited you to prove you can survive in a pixelated world, littered with waves of foes that are steadfast in their quest to terminate your existence. You play as the infamous bounty hunter named Black Paradox. You must travel through space to defeat the most dangerous criminal organization in the galaxy called the Hellraisers and its seven lieutenants.

It is a tall task indeed but fret not as you are the wielder of a powerful arsenal which when coupled with supreme skill becomes immovable. You will also have power-ups, drones, and other upgrades at your disposal.

NINTENDO CODE : This is a digital code for Black Paradox Nintendo Switch. Use the download code on the Nintendo eShop of your Console. Once connected to the Nintendo eShop, you can enter and redeem the Download Code. Read carefully the store description about any language and region restrictions.
Bundle
Standard Edition