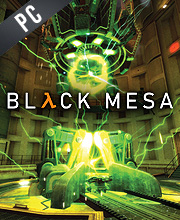 What is Black Mesa CD key?

It's a digital key that allows you to download Black Mesa directly to PC from the official Platforms.

How can I find the best prices for Black Mesa CD keys?

Allkeyshop.com compares the cheapest prices of Black Mesa on the digital downloads market to find the best sales and discount codes on trusted stores.

Black Mesa a massive fan project 15 years in the making, to remake and overhaul the original half-life in the source engine improving both the graphic and gameplay quality. An experiment carried out by the Anomalous Materials department of the Black Mesa Research Facility had gone awry triggering a resonance cascade that allowed extradimensional aliens to invade the facility. In the middle of it all Dr. Gordon Freeman He must fight his way through the facility and escape the carnage.

Black Mesa may show its age in some areas, but that doesn’t detract from what is an otherwise stunning achievement. It’s not only Half Life at its best – it’s one of the finest shooters available today.

A quality remake that broadens the scope of the original and massively improves its final chapters.

Whether you played Half-Life back in the day or not, Black Mesa is definitely the best way to experience one of the crown jewels of first-person shooter history. It doesn’t look like a 2020 remake – because it’s not, really – but it still makes great use of the distinctively creepy atmosphere and excellent combat that left such a mark on this genre. And what better way to get ready for Valve finally returning to the Half-Life universe?

Zoom 1m 3m 1y All
Track product
EU STEAM CD KEY: Requires an EUROPEAN IP address or you must activate it with a VPN (Virtual Private Network) in order to play Black Mesa. Might have languages restrictions or language packs. Read the description on the store game page to know if the EU IP is only needed for activation or for playing also (maybe on EU Servers). Most of the stores offer you their help, or show you how to do this with a tutorial to follow.
EUROPEAN STEAM GIFT : It’s a steam gift for Europe which requires an European IP address to activate and to play Black Mesa on Steam. Read carefully the store description about region and language restrictions.
STEAM GIFT : A Steam gift is a one-time transfer you receive. You activate and install Black Mesa to play on Steam, it is a non-refundable game that stays in your Steam games collection. Please read the store description about any language or region restrictions.
STEAM CD KEY : Use the Steam Key Code on Steam Platform to download and play Black Mesa. You must login to your Steam Account or create one for free. Download the (Steam Client HERE). Then once you login, click Add a Game (located in the bottom Left corner) -> Activate a Product on Steam. There type in your CD Key and the game will be activated and added to your Steam account game library.
Standard Edition
Compare Choose & Buy Download (772)

I loved it, played interloper and nihilant yesterday and was kinda blown away, letting us free the vortigaunts through our actions and seeing them enslaved and forced like that was pretty amazing storytelling wise, that simply wasn’t there in Half Life 1 afaik, I didn’t even know the vortigaunts were enslaved until half life 2 and even there I had to read for it kinda.

But does this date refer to the release of the full game?
Because the game has already been on sale for a long time.

The game can be played on its early access state. It says “Get instant access and start playing; get involved with this game as it develops.
Note: This Early Access game is not complete and may or may not change further. If you are not excited to play this game in its current state, then you should wait to see if the game progresses further in development.

If you have any other questions, feel free to leave us a message.