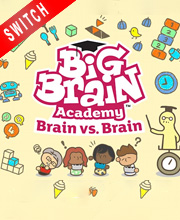 What is Big Brain Academy Brain vs. Brain Game Code?

It's a digital key that allows you to download Big Brain Academy Brain vs. Brain directly to Nintendo Switch directly from Nintendo eShop.

How can I find the best prices for Big Brain Academy Brain vs. Brain on Nintendo Switch ?

Allkeyshop.com compares the cheapest prices of Big Brain Academy Brain vs. Brain on the digital downloads market to find the best sales and discount codes on trusted stores.

Big Brain Academy: Brain vs. Brain is a puzzle-focused party game about developing the reflexes of your brain by solving difficult puzzles, developed by Nintendo. Take on a series of brain-bending activities that test your mental mettle like memorizing a series of numbers, identifying an animal that is slowing coming to focus, or helping a train by guiding it to its destination. Play with 3 other people in the game’s multiplayer mode, the highest score out of your four wins, difficulty can be adjusted for each player so a kid can hold its own against an adult in this battle of the brains.

Big Brain Academy: Brain vs. Brain is a fantastic couch co-op game, even for a system like the Nintendo Switch, which has no shortage of them, and is a great addition to the library of those who love playing games with their friends.

Big Brain Academy: Brain vs. Brain is a puzzle game meant to strengthen your thinking skills in five different categories through fast-paced minigames. You can compete against friends or test your skills against other people’s recorded attempts. It’s a simple premise that succeeds thanks to adorable presentation and addicting mechanics, even if it’s a little feature-light.