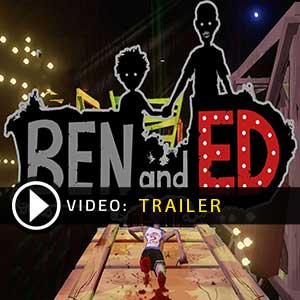 What is Ben and Ed CD key?

It's a digital key that allows you to download Ben and Ed directly to PC from the official Platforms.

How can I find the best prices for Ben and Ed CD keys?

Allkeyshop.com compares the cheapest prices of Ben and Ed on the digital downloads market to find the best sales and discount codes on trusted stores.

Ben and Ed is an action–adventure video game developed and published by Sluggerfly. Get to take part in the game show called “Rundead”.

This 3D platformer will have you controlling Ed, who is actually a zombie. Ed was not a zombie all his life. He was a regular human who is actually great at marathons even winning a silver medal at the “Candy Fun Marathon”. After winning he died of a heart attack and for some unknown reason, he became the very first zombie. While wandering aimlessly, he bumps into Ben.

Ben is a regular kid who did not have any close friends. He befriended Ed by feeding him meat as well as dead animals. They had a great thing going on for them until Hans Showmaster found out about Ed. Hans is a successful show maker, he is filthy wealthy, famous and ruthless. He quickly thought of a new show platform that would involve Ed. To further convince Ed to join, he abducts Ben and holds him hostage.

Play as Ed as he survives the 23 deadly obstacle courses. Crawl, jump, dodge or whatever. Do anything and everything to reach the goal and save Ben. If that means losing some limbs, well you are a zombie anyway, it won’t hurt that much. Don’t worry, you can still get back the body parts you’ve lost, you would just have to look for them.

Be Ed and defeat the monstrous machines, unlock the challenges and save your pal, Ben.

Zoom 1m 3m 1y All
Track product
STEAM CD KEY : Use the Steam Key Code on Steam Platform to download and play Ben and Ed. You must login to your Steam Account or create one for free. Download the (Steam Client HERE). Then once you login, click Add a Game (located in the bottom Left corner) -> Activate a Product on Steam. There type in your CD Key and the game will be activated and added to your Steam account game library.
Standard Edition
Compare Choose & Buy Download (743)