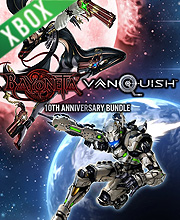 It's a digital key that allows you to download Bayonetta & Vanquish 10th Anniversary Bundle directly to Xbox One from Xbox Live.

How can I find the best prices for Bayonetta & Vanquish 10th Anniversary Bundle on Xbox one?

Bayonetta & Vanquish 10th Anniversary Bundle is a remastered dual-pack featuring remastered versions of Bayonetta and Vanquish. Both games have been remastered with 4K graphics and are available at 60 frames per second. As the name of the buddle suggests, it was created as a way of commemorating the 10th anniversary of two hit PlatinumGames releases. This presents a golden opportunity for players to experience the origin of the Bayonetta series with the cult classic, original action–adventure game. Vanquish also returns with the sci-fi shooter action that fans know and love. Those who were here from the beginning are in for an exhilarating nostalgic experience while those who are new to Vanquish will have the opportunity to be wowed like the vintage Vanquish players of 2010. Grab the bundle to join in on the celebration with a special launch edition Steelbook, featuring custom 10th-anniversary art. The Bayonetta & Vanquish 10th Anniversary Bundle is available for Xbox One.