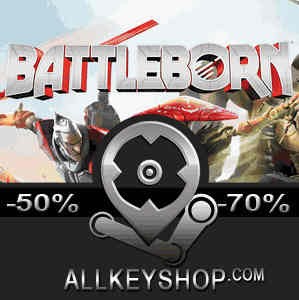 What is Battleborn CD key?

It's a digital key that allows you to download Battleborn directly to PC from the official Platforms.

How can I find the best prices for Battleborn CD keys?

Allkeyshop.com compares the cheapest prices of Battleborn on the digital downloads market to find the best sales and discount codes on trusted stores.

Battleborn is a first-person shooter video game developed by Gearbox Software and published by 2K Games.

Battleborn take place in the end of times, only one Star “Solis” is still alive. The game feature 5 factions for a total of 25 playable heroes with different abilities and weapons. They had decide to fight against the evil that almost destroyed the whole universe.

The game is created by the team who made Borderlands. It is a mix between many kind of games, it has MOBA part with special skills, ultimate and level-up and FPS parts in the gameplay among others making it a nonesuch kind of game.

The game features a Story mode that can be play in solo or in co-op local or online. It also has 3 multiplayer modes, up to 10 players (5vs5 format).

By playing in any of the modes solo or multiplayer, you will gain profile commander rank and individual character ranks. The ranks gain are permanent, each character can go untill the Level 10 witch will make you able to use new skins, skills and weapons for them. The Commander ranks allow you to use new badges and titles for glory, you will also receive different loots for upgrade your heroes.

Battleborn is a new kind of game that you don’t want to miss!

Bonus: Battleborn + Battleborn Firstborn Pack DLC (Can be different or change over time for each seller. Please refer to the seller’s website)

Zoom 1m 3m 1y All
Track product
EU STEAM CD KEY: Requires an EUROPEAN IP address or you must activate it with a VPN (Virtual Private Network) in order to play Battleborn. Might have languages restrictions or language packs. Read the description on the store game page to know if the EU IP is only needed for activation or for playing also (maybe on EU Servers). Most of the stores offer you their help, or show you how to do this with a tutorial to follow.
STEAM CD KEY : Use the Steam Key Code on Steam Platform to download and play Battleborn. You must login to your Steam Account or create one for free. Download the (Steam Client HERE). Then once you login, click Add a Game (located in the bottom Left corner) -> Activate a Product on Steam. There type in your CD Key and the game will be activated and added to your Steam account game library.
Bonus Edition
Dayone Edition
Deluxe Edition
Standard Edition
Compare Choose & Buy Download (759)

Amazing game, the biggest problem i would this game faced was its released date

Very fun game! I loose hours and hours playing it!

This game is psychedelic and funny, play alone or with friend is fks funny!

This game is for just 15$ with more games like Borderlands the pre-sequel, mafia II, nba 2k6 and others in humble bundle

The best cdkey store where to buy a Battleborn cd key right now is cdkeys.com