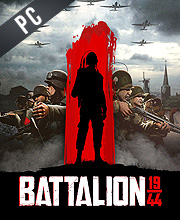 It's a digital key that allows you to download BATTALION 1944 directly to PC from the official Platforms.

How can I find the best prices for BATTALION 1944 CD keys?

Allkeyshop.com compares the cheapest prices of BATTALION 1944 on the digital downloads market to find the best sales and discount codes on trusted stores.

Play in the 5v5 infantry combat where classic competitive shooting meets a refined ‘classic’ FPS feel. Here you can only count on your skills and your rifle. There won’t be any overpowered guns available in the game. You only have to let your skills shine through.

Get to play in the different game modes like Wartide, Capture the Flag, Domination, Team Deathmatch, and Free For All.

Matchmaking in the game is skill based. Here, your level of performance is rated and you will be matched with those with the same skill as you.

Level up your character with the war chests earned through leveling up as well as through the in-game store.

Battalion 1944 also allows you to host a private match or a mod through the game’s dedicated servers.

EUROPEAN STEAM GIFT : It’s a steam gift for Europe which requires an European IP address to activate and to play BATTALION 1944 on Steam. Read carefully the store description about region and language restrictions.
STEAM GIFT : A Steam gift is a one-time transfer you receive. You activate and install BATTALION 1944 to play on Steam, it is a non-refundable game that stays in your Steam games collection. Please read the store description about any language or region restrictions.
STEAM GIFT ROW : This a steam gift for ROW regions. It means for Rest Of the World. This product can't be purchased and activated in Several countries. Please read the store description to know the full list of countries which are concerned.
STEAM CD KEY : Use the Steam Key Code on Steam Platform to download and play BATTALION 1944. You must login to your Steam Account or create one for free. Download the (Steam Client HERE). Then once you login, click Add a Game (located in the bottom Left corner) -> Activate a Product on Steam. There type in your CD Key and the game will be activated and added to your Steam account game library.
Bundle
First to Fight Edition
Standard Edition

Looks great, but the reviews are all over the place – I guess that’s also why it’s so cheap already… I think I’ll pass unless it goes in the bargain bin 🙂

BATTALION 1944 is amazing game, you can buy it now with best price.

Looks like a fun to play multiplayer FPS game set in WWII, too bad there is no single player campaign, but still it has good graphics, gameplay and the deals are very good!

Good shooter game. Thanks allkeyshop for easy way to get best price.