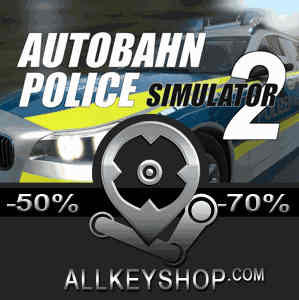 It's a digital key that allows you to download Autobahn Police Simulator 2 directly to PC from the official Platforms.

How can I find the best prices for Autobahn Police Simulator 2 CD keys?

Allkeyshop.com compares the cheapest prices of Autobahn Police Simulator 2 on the digital downloads market to find the best sales and discount codes on trusted stores.

Autobahn Police Simulator 2 is a simulation video game developed by Z-Software and published by Aerosoft GmbH.

The game is about the daily working life of a police officer on the German Autobahn. In this game, the player is responsible for enforcing law and order on Europe’s fastest road in different numerous cases. Pursuits, speed checks, search operations and responding to accidents are one of the missions the player has to accomplish.

The game simulation covers a total Autobahn stretch of 40 kilometers. Some areas have speed limits where the player can have speed checks. And to create a real life and exciting atmosphere, realistic radio communications were also incorporated.

Players get the chance to play in the Story Campaign with the tasks at hand as well as enjoy “Free Play” mode. This mode will generate random radio calls for missions at various locations and time of the day which the player is free to accept. Police patrol cars are loaded with equipment to secure and inspect accident sites, while emergency vehicles, such as rescue services and fire trucks complete the scene at the accident site.

Autobahn Police Simulator 2 offers a view of the player’s perspective, from within the car, to exterior camera view. Using the steering wheel of the patrol car will make the simulator more exciting and enjoyable.

EU STEAM CD KEY: Requires an EUROPEAN IP address or you must activate it with a VPN (Virtual Private Network) in order to play Autobahn Police Simulator 2. Might have languages restrictions or language packs. Read the description on the store game page to know if the EU IP is only needed for activation or for playing also (maybe on EU Servers). Most of the stores offer you their help, or show you how to do this with a tutorial to follow.
EUROPEAN STEAM GIFT : It’s a steam gift for Europe which requires an European IP address to activate and to play Autobahn Police Simulator 2 on Steam. Read carefully the store description about region and language restrictions.
STEAM GIFT : A Steam gift is a one-time transfer you receive. You activate and install Autobahn Police Simulator 2 to play on Steam, it is a non-refundable game that stays in your Steam games collection. Please read the store description about any language or region restrictions.
STEAM CD KEY : Use the Steam Key Code on Steam Platform to download and play Autobahn Police Simulator 2. You must login to your Steam Account or create one for free. Download the (Steam Client HERE). Then once you login, click Add a Game (located in the bottom Left corner) -> Activate a Product on Steam. There type in your CD Key and the game will be activated and added to your Steam account game library.
Standard Edition