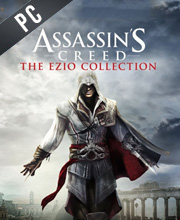 What is Assassin's Creed The Ezio Collection CD key?

It's a digital key that allows you to download Assassin's Creed The Ezio Collection directly to PC from the official Platforms.

How can I find the best prices for Assassin's Creed The Ezio Collection CD keys?

Allkeyshop.com compares the cheapest prices of Assassin's Creed The Ezio Collection on the digital downloads market to find the best sales and discount codes on trusted stores.

Ezio’s trilogy helped build Assassin’s Creed into the giant franchise it is today thanks to its fantastic storytelling, amazing characters, and gorgeous world building. And while all of that is still here in The Ezio Collection, the lack of meaningful improvements and any sort of substantial bonus content make it a tough compilation to recommend.

If you are a newcomer and want to figure out where is the best place to start in The Assassin Creed franchise, then this is the place to start.

Buy this collection and get these: