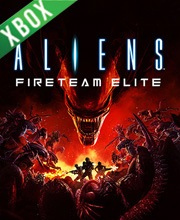 It's a digital key that allows you to download Aliens Fireteam Elite directly to Xbox One from Xbox Live.

How can I find the best prices for Aliens Fireteam Elite on Xbox one?

Allkeyshop.com compares the cheapest prices of Aliens Fireteam Elite on the digital downloads market to find the best sales and discount codes on trusted stores.

Aliens Fireteam Elite is a survival co-op shooter game based on the alien franchise developed by Cold Iron Studios, it’s set 23 years after the events of the original Alien trilogy films, you are a colonial marine stationed onboard the UAS Endeavor, your team received a distress signal to a remote outer colony planet called LV895, but after initial investigation on the planet you realize that it’s research facilities are used to experiment with Xenomorphs and said Xenomorphs has now escaped and has taken over the facilities. It’s up to you and your team to stop these new strains of Xenomorphs from propagating and taking over the entire planet.

This Edition of Aliens Fireteam Elite contains the base game, the preorder bonus if you bought the game before its release, the Season Pass which contains 4 yet unnamed DLC’s, some more in-game cosmetic items such as emotes and gun skins.