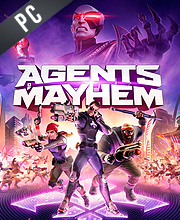 What is Agents of Mayhem CD key?

It's a digital key that allows you to download Agents of Mayhem directly to PC from the official Platforms.

How can I find the best prices for Agents of Mayhem CD keys?

Allkeyshop.com compares the cheapest prices of Agents of Mayhem on the digital downloads market to find the best sales and discount codes on trusted stores.

Agents of Mayhem is an action, adventure video game developed by Deep Silver Volition and published by Deep Silver. This is the newest game that came from the creators of Saints Row.

Set in a futuristic version of Seoul South Korea in the Saints Row universe. You will be able to choose three agents from the twelve total on the roster. Each agent has their own unique styles and abilities. You will be able to switch between all three characters. The list of agents to choose from are Fortune, Hardtack, Hollywood, Rama, Kingpin, Yeti, Scheherazade, Oni, Braddock, Daisy, Red Card and Joule.

Seoul or also known as The City of Tomorrow is where the Legion is at. They are a group of criminal masterminds that are for now the rulers of Earth. Mayhem is the only group who is gutsy enough to face Legion and take back the world.

Take your adventures in the open world of The City of Tomorrow. Go on groundbreaking missions, use your crazy doomsday devices and explore the underground lairs.

If you had fun in Saints Row, you will definitely have a blast in Agents of Mayhem.

Day one: Agents of Mayhem + 6 Day oneeditions skins to “Geek-out” your agents.

The gameplay is a mashup between Saints Row and Crackdown. You play a variety of different agents jumping, dashing, and driving to objectives battling the forces of LEGION.

seems pretty good, i want to play it now AAAAHHHHH!!!

Pretty cool that an open-world game like this is going outside the box and taking us to Seoul!

GamesDeal may have a better deal as of August 18 but there may be stock issues as well.