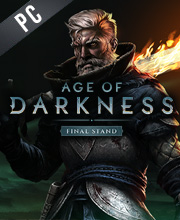 What is Age of Darkness Final Stand CD key?

It's a digital key that allows you to download Age of Darkness Final Stand directly to PC from the official Platforms.

How can I find the best prices for Age of Darkness Final Stand CD keys?

Allkeyshop.com compares the cheapest prices of Age of Darkness Final Stand on the digital downloads market to find the best sales and discount codes on trusted stores.

Age Of Darkness: Final Stand is a dark fantasy-themed survival RTS game developed by PlaySide a Melbourne based studio, its gameplay is reminiscent of They are Billions where you have to survive and thrive against a horde of enemies a whole cast of medieval fantasy-themed undead monsters, and even entities beyond our understanding. No one knows exactly where the darkness originally came from or even what it is exactly, some say it’s a physical manifestation of human malevolence or a mass of damned souls ending the world of the living. But whatever it is your objectives remain the same build, gather and fight and make your last stand light up the map to buy yourself time and ward them off for as long as possible.

Zoom 1m 3m 1y All
Track product
ORIGIN CD KEY : Use the Origin Key Code (Electronic Arts - EA) on Origin Platform to download and play Age of Darkness Final Stand. You have to login to your Origin Account or create one for free. Download and install the Origin Software HERE) then you can activate the game on it. Once installed, start Origin, click on the Origin Tab and click on Redeem Product Code and just enter the key. The game will appear in your My games list.
EU STEAM CD KEY: Requires an EUROPEAN IP address or you must activate it with a VPN (Virtual Private Network) in order to play Age of Darkness Final Stand. Might have languages restrictions or language packs. Read the description on the store game page to know if the EU IP is only needed for activation or for playing also (maybe on EU Servers). Most of the stores offer you their help, or show you how to do this with a tutorial to follow.
STEAM GIFT : A Steam gift is a one-time transfer you receive. You activate and install Age of Darkness Final Stand to play on Steam, it is a non-refundable game that stays in your Steam games collection. Please read the store description about any language or region restrictions.
STEAM CD KEY : Use the Steam Key Code on Steam Platform to download and play Age of Darkness Final Stand. You must login to your Steam Account or create one for free. Download the (Steam Client HERE). Then once you login, click Add a Game (located in the bottom Left corner) -> Activate a Product on Steam. There type in your CD Key and the game will be activated and added to your Steam account game library.
STEAM KEY ROW : It means for Rest Of the World countries which are not concerned by the region restrictions. This product can't be purchased and activated in Several countries. Please read the store description to know the full list of countries which are concerned. Use the key to Download and play Age of Darkness Final Stand on Steam.
Early Access
Standard Edition
Compare Choose & Buy Download (772)