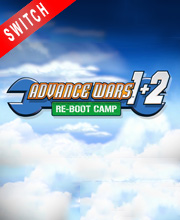 It's a digital key that allows you to download Advance Wars 1+2 Re-Boot Camp directly to Nintendo Switch directly from Nintendo eShop.

How can I find the best prices for Advance Wars 1+2 Re-Boot Camp on Nintendo Switch ?

Allkeyshop.com compares the cheapest prices of Advance Wars 1+2 Re-Boot Camp on the digital downloads market to find the best sales and discount codes on trusted stores.

Advance Wars 1+2 Re-Boot Camp is a remastering Developed by WayForward, of the classic turn-based strategy games that were originally released for the Game Boy Advance. As the tactical adviser of the Orange Star Army, you must lead them to victory. Use your expertise to move land, air, and naval units across the battlefield, take down enemy squads and capture towns and bases to secure victory but keep an eye on the game-changing terrain and weather.

Zoom 1m 3m 1y All
Track product
NINTENDO CODE : This is a digital code for Advance Wars 1+2 Re-Boot Camp. Use the download code on the Nintendo eShop of your Console. Once connected to the Nintendo eShop, you can enter and redeem the Download Code. Read carefully the store description about any language and region restrictions.
Standard Edition
Compare Choose & Buy Download (772)