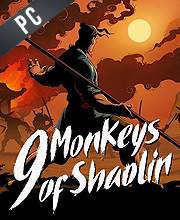 What is 9 Monkeys of Shaolin CD key?

It's a digital key that allows you to download 9 Monkeys of Shaolin directly to PC from the official Platforms.

How can I find the best prices for 9 Monkeys of Shaolin CD keys?

Allkeyshop.com compares the cheapest prices of 9 Monkeys of Shaolin on the digital downloads market to find the best sales and discount codes on trusted stores.

9 Monkeys of Shaolin is an action, adventure, role-playing video game that is developed by Sobaka Studio and published by Buka Entertainment.

You will play as a Chinese fisherman Wei Cheng who is out to avenge his family and loved ones who were killed in a pirate raid in your village. Wei Cheng is no mere fisherman though as he has knowledge of the basics of the ancient martial arts that had been mastered by the legendary Shaolin monks.

The game offers 3 unique fighting styles where you can either fight on land, fight on air or fight using the mysterious magic seals. Also sharing a captivating narrative where you get to experience Wei Chengs transformation from a simple fisherman into a master of the Shaolin martial arts. The game’s character development is extensive where players get to unlock perks discover items and various fighting styles. There are more than 25 different locations. Also, there are more than 10 different types of Chinese and Japanese polearms, having their own special traits.

Co-op is also available where you can invite one of your friends to help you through the game together.

EU STEAM CD KEY: Requires an EUROPEAN IP address or you must activate it with a VPN (Virtual Private Network) in order to play 9 Monkeys of Shaolin. Might have languages restrictions or language packs. Read the description on the store game page to know if the EU IP is only needed for activation or for playing also (maybe on EU Servers). Most of the stores offer you their help, or show you how to do this with a tutorial to follow.
EUROPEAN STEAM GIFT : It’s a steam gift for Europe which requires an European IP address to activate and to play 9 Monkeys of Shaolin on Steam. Read carefully the store description about region and language restrictions.
STEAM GIFT : A Steam gift is a one-time transfer you receive. You activate and install 9 Monkeys of Shaolin to play on Steam, it is a non-refundable game that stays in your Steam games collection. Please read the store description about any language or region restrictions.
STEAM CD KEY : Use the Steam Key Code on Steam Platform to download and play 9 Monkeys of Shaolin. You must login to your Steam Account or create one for free. Download the (Steam Client HERE). Then once you login, click Add a Game (located in the bottom Left corner) -> Activate a Product on Steam. There type in your CD Key and the game will be activated and added to your Steam account game library.
Standard Edition