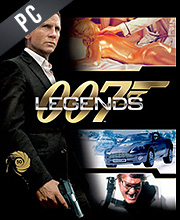 It's a digital key that allows you to download 007 Legends directly to PC from the official Platforms.

How can I find the best prices for 007 Legends CD keys?

Allkeyshop.com compares the cheapest prices of 007 Legends on the digital downloads market to find the best sales and discount codes on trusted stores.

007 Legends is a first-person shooter video game developed by Eurocom and published by Activision. The main character is obviously the British secret agent James Bond as the title suggests.

The game celebrates 50 years of James Bond in films by letting the player take part in popular scenes taken from the movies itself like Goldfinger, Moonraker, and more. While the player will always play as Daniel Craig’s Bond, they’ll be able to take on classic enemies like Oddjob, Goldfinger, and Gustav Graves in their original look for more nostalgia.

You are agent 007 – top agent of the government’s secret organization committed to protecting the world against terrorists and power-mad criminals. Each of the 007 Legends cinematic-inspired missions include multiple levels based on re-imaginings of some of the most iconic James Bond films, showcasing state-of-the-art spy gadgets, an arsenal of weapons and tricked-out vehicles, exotic locales, and intense moments that require Bond’s dexterity to defeat notorious villains and their henchmen.

Zoom 1m 3m 1y All
Track product
STEAM CD KEY : Use the Steam Key Code on Steam Platform to download and play 007 Legends. You must login to your Steam Account or create one for free. Download the (Steam Client HERE). Then once you login, click Add a Game (located in the bottom Left corner) -> Activate a Product on Steam. There type in your CD Key and the game will be activated and added to your Steam account game library.
Bonus Edition
Standard Edition
Compare Choose & Buy Download (743)