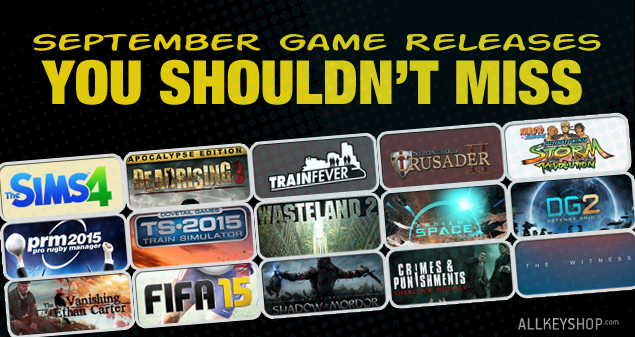 It’s a new month, and with it comes new awesome game releases! Of course, since we’re all about to end our summer holidays, it’s also time to stack up on some hot games to play as autumn comes. 🙂

Wondering which games to buy this month? Check out the 15 September game releases you shouldn’t miss:

Packed with improvements such as personalization of your Sim’s appearance or rooms, The Sims 4 promises a better gaming experience. Also, with several editions to choose from, players are given a treat with add-ons such as new outfits, decorations, and much more.

READ: How to Buy The Sims 4 CD Key

Dead Rising 3 is set 10 years after the events that happened in Fortune City in Dead Rising 2. Players are introduced to a new protagonist, Nick Ramos -a young mechanic with a mysterious past (and also has  a tattoo enveloped in mystery). The objective of the game is simple: to escape the impending doom that is about to happen in Los Perdidos, California – a city plagued with zombies and is about to be wiped off with a military strike to eventually “eliminate” the undead ones. Nick and friends must find a way out soon, before everything else is too late.

Another simulation game, Train Fever is set in the year 1850. Your objective is to establish a transport company and be its manager. The game involves building infrastructure such as railways and stations, purchasing transportation vehicles, and managing lines.

The game is packed with features such as modifiable terrains and advanced passenger simulation. It also includes vehicles from the past 150 years. What’s also good is that the game has no grids, meaning it does not limit you to build in 90 (or 45) degree angles.

The much-awaited sequel to Firefly Studios’ Stronghold Crusader, Stronghold Crusader 2 returns to the deserts of the Middle East in the year 1189. The game is dubbed as “castle simulation”, and the objective is to become the greatest Lord by managing your desert economy and seizing control of vital ones. Players can choose from playing characters such as a Crusader Knight or an Arabic freedom fighter.

Take the role of a real rugby union manager with Pro Rugby Manager 2015. As the union manager, you need to guarantee sporting success on the field and financial success off it and be the next Champion. The game includes features such as Club Management, Team Management, and Match Day.

Drive some of the world’s most powerful high-speed trains on three iconic routes around the globe with Train Simulator 2015! The game also includes the newly created TS Academy, a training area designed to introduce new players to the series quicky and easily.

Dubbed as the first CRPG to ever allow players to control and command individual party members for tactical purposes, the lineage of The Wasteland series continues with Wasteland 2 – now modernized for today’s players. Experience turn-based tactical combat that will surely test your strategy skills in order to survive a desolate world where brute strength is not enough to save you.

If strategic starship battles are your kind of thing, Ancient Space is definitely the best choice for you. As the protagonist, you will take command of a fleet on a scientific mission to search for undiscovered territories in a place called “The Black Zone” located in outer space. Put your strategy skills to the test for the sake of the survival of your crew and the success of the mission.

Defense Grid 2, DG2, is a tower defense game which is also the sequel to Hidden Path Entertainment’s Defense Grid: The Awakening (2008). Get ready as you take on new worlds and threats to test your tower placement strategies. Defense Grid 2 also comes with a new look and a compelling single-player campaign, plus the addition of new game modes, online PvP and multi-player co-ops.

The Vanishing of Ethan Carter is a game inspired by early 20th-century fictions, and revolves around the story of Paul Prospero, an occult-minded detective. As the character of Paul, you will seek to unfold the mystery of the disappearance of Ethan Carter using your supernatural skills of communicating with the dead.

Fight through Mordor and uncover the truth of the spirit that compels you, discover the origins of the Rings of Power, build your legend and ultimately confront the evil of Sauron in this new chronicle of Middle-earth.

Sherlock Holmes: Crimes and Punishments gives players the chance to play as the greatest detective of all time – Sherlock Holmes. Solve high-profile cases from murder, disappearances, thefts, and more!

The Witness is an upcoming exploration-puzzle game which is still under development. It will be released for the PC and Playstation 4 simultaneously. The release for other platforms will come at a later date according to its developer.

So which of these are your favorites and what games are you looking forward to this month? Tell us in the comments! 🙂

lol, i played every game on this list 😀 but sure sims 4 and dead rising are the best.

all good games are here

My poor wallet D: it started to cry!

Join our Rewards Program and get games for free =)

My favorite game is FIFA 15