15 of the Best Demon Games and Compare Prices

“You want to play a Demon Games, but don’t know which one to choose?

Luckily Allkeyshop is here to help you with this top 15 of the best Demon Games!”

Devil May Cry 5 brings back the devil hunting and high-octane slaying, all in glorious over-the-top action. The game features Dante and Nero’s return as playable characters, along with a new character, V. The game uses seven ranks for its style ranking system, grading you after every fight and level. It starts at D, for Dismal, and moves up to SSS for Smokin’ Sexy Style.

Enter the Old Cathedral and descend into the darkest dungeons to save the world and slay the Archdemon. Fight your way through procedurally generated dungeons, complete quests when you want to, and slay dozens of unique monsters. Survive in multiple modes, including a roguelike mode, and take advantage of the game’s Twitch integration to improve the experience for you and your viewers.

Lo Wang returns with an arsenal of over 70 guns and blades and his unique archaic magic to defeat the demonic enemies that threaten humanity. Battle through procedural levels, discover new paths, and choose the right weapon for the job to dismantle, dismember, or pierce your enemies. Play through the rich campaign alone or team up with up to 4-player co-op support available, and tackle the challenges together in unique missions.

As a tormented soul within the deepest parts of Hell, learn to possess demons, use unique abilities, and escape from an agony worse than hell. Explore Hell in all its gory detail, avoiding the traps and dangers that reside within, and find your way to the Red Goddess.

Trapped in an arcade machine, you must think outside the box and solve puzzles created by the devil himself if you are to escape. Solve the puzzles and feel the wrath of the devil as he insults you for doing so.

As an exorcist you are tasked with cleansing the sinners and maintaining the world’s harmony. Investigate the evil workings of daemons and understand why they act in secrecy and sin. Use tools, investigative techniques, and exorcism to defeat evil and restore peace for those that sway from the path of good.

Lucifer Within Us System Requirements

Battle for survival in a deadly arena and stay alive long enough to earn powerful abilities. Use bunny hopping, strafing, magic daggers, speed boosts, and double jumps to survive and climb the global leaderboards. Watch a friend’s attempt or learn from the pros with the leaderboard replay system.

The classic Samurai legend is reborn, featuring the original’s swordplay and epic revenge story. Play it all over again with updated controls, enhanced visuals, new resolution support, and improved UI.

Wage war with the armies of Heaven and cut your way through angelic realms as you bring Heaven and its influence over Earth to an end. Master powerful weapons inspired by lore, visit biblical locations and Archangels using strategy and force. Earn upgrades that change your playstyle and weaknesses, and bring down the fall of Heaven to repaint Earth in your own image.

Play as Hellgore, a tortured soul seeking revenge for the massacre of his people. The game takes inspiration from 90s FPS classics and features all the non-stop fast-paced action, gory killing, insane weaponry, and secret locations you expect from the genre.

An investigator of the paranormal, you must solve cases to uncover a conspiracy and discover the reason behind your sister’s disappearance. Visit dozens of locations, complete puzzles, and dive into the gripping story across four epic episodes.

For the first time, play DOOM 64 on your PC, with all the gore and hardcore FPS action first seen in 1997. Stop Hell’s forces with devastating upgradable weapons, and search for secrets across 30 levels as you battle to defeat the Mother of Demons.

Unleash mayhem and kill The Devil himself in this epic action game about saving the leader of the Saints’ soul from Hell. Alone or in 2-player co-op, wage war on the demons of Hell and tear them apart using over-the-top weaponry and abilities. Shooting your way out of Hell will never feel this good again.

As a servant of chaos, help evil reign over the town of Darkestville and bring torment to the townspeople. Avoid the horrid demon hunters who wish to banish you, and solve dastardly puzzles to rid the world of good and bring back the joy of causing mayhem.

What is a Demon Game ?

A demon video game will heavily feature supernatural beings, and either has the player fighting against evil or for evil. 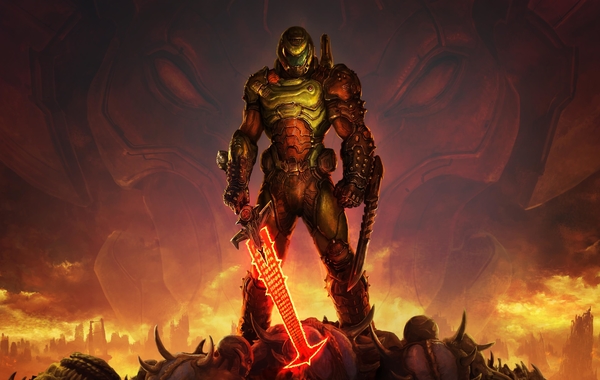 These games can focus on demons or characters closely associated with evil, religion, occultism, folklore, fiction, and mythology.

They can feature darker themes, such as the inner demons of the mind. These are different kinds of monsters and can be darker in tone and presentation.

Why Are We Doing a Top 15 Demon Games List?

Demon Games are available at incredible prices, but with so many to choose from, we want to help you pick the game that’s right for you.