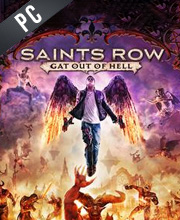 What is Saints Row Gat Out of Hell CD key?

It's a digital key that allows you to download Saints Row Gat Out of Hell directly to PC from the official Platforms.

How can I find the best prices for Saints Row Gat Out of Hell CD keys?

Allkeyshop.com compares the cheapest prices of Saints Row Gat Out of Hell on the digital downloads market to find the best sales and discount codes on trusted stores.

You will be playing as either Johnny Gat or Kinzie Kensington. You can also change between the two, or play side by side via online co-op. Explore the open-world environment of the city of hell. You will be equipped with super natural powers: wings to fly, the ability to summon demons, and a divine aura. Weapons available are named after the 7 deadly sins. For the story to progress, finish the set activities to fill up “Satan’s Wrath” meter.

It is lieutenant Kinzie Kensington’s birthday and the Third Street Saints are present. For fun they played with a Ouija Board, that belonged to Alistair Crowley. They accidentally summon Satan from the board. Satan then grabs The Boss and drags him to Hell as a groom for his daughter Jezebel.

Johnny and Kinzie decided that they will be saving The Boss and went to hell in search for him. Jezebel on the other hand is rebelling against her father and leads Johnny and Kinzie to Satan. Satan bargains Johnny for the Boss, he will be replacing him as the groom.

Find out if Johnny goes through with marrying Jezebel. Play Saints Row: Gat Out of Hell.

Bonus: Gat Out of Hell + Devil’s Workshop Pack. Restricted to Europe only.

difficult to fly with wings, but i got used to it..
That is only things that was difficult for me (was)

If you are interested i can say that game is cool! store to buy the game is Kinguin!!