15 of the Best MOBA Games and Compare Prices

“You want to play a MOBA Games, but don’t know which one to choose?

Luckily Allkeyshop is here to help you with this top 15 of the best MOBA Games!”

Join millions of players on Steam’s most-played game. There is an incredible diversity of heroes, abilities, and powerful items – with all heroes being made available for free. Dota 2 features unranked and ranked matches, adjustable bot difficulty, regular updates, and more than 100 heroes.

Join millions of players and become a god. Play as one of more than 100 mythological characters and wield their legendary weapons, and unleash their game-changing powers, Play unranked and ranked game modes, and climb the ranks with a competitive team.


Become a Champion of the Realm in this fantasy team and objective-based shooter. Choose from 45 unique Champions across four classes, each with unique abilities and fighting style, and jump straight into the action in unranked and ranked game modes with ten maps available. Unlock new Champions, cosmetics, and sprays by completing daily and weekly challenges, completing matches, and ranking up.


Fight for survival on a deserted island in a game that combines MOBA, battle royale, and survival elements to be the last one standing. Level up by crafting equipment, hunting animals, and destroying your enemies. Use guns, swords, and shurikens. Play solo or with friends, and even host a tournament.


Face off in intense 5v5 battles and take down lanes and towers in the biggest MOBA on the planet. Select from more than 140 champions, master your abilities, and learn the builds that maximize your potential. Game modes include Classic, Dominion, and ARAM, with offline and online options available.

6. Heroes of the Storm


Play as your favorite hero from Blizzard’s catalog with characters from Diablo, Overwatch, and World of Warcraft. Play in dynamic battlegrounds, with each map having unique objectives and quests to capture and complete. Play across several game modes, including Quick Play, Unranked, Custom, and Brawls.

Heroes of the Storm System Requirements

Be an Awesomenaut and battle across 2D cartoon-style maps in fast-paced 3v3 online matches. Every Awesomenaut comes with unique abilities, upgrades, and cosmetics. Create, share, and download maps, game modes, and content via the Steam Workshop.


Brawl in fast-paced 2v2 and 3v3 matches and dedicate your life to the arena. Fights are explosive, and you need to master your abilities to be victorious. Pull off skill-shots, master the art of cursor-based aiming, dodge projectiles, and use your rites to customize your playstyle and gain the advantage.

Assemble your squad of heroes and compete for the objectives in fast-paced 6v6 combat in the ever-popular Overwatch. Choose from more than 30 heroes, each with unique abilities, playstyles, and weapons. Play as a tank, support, or damage. Unlock loot, achievements, and trophies, and battle across multiple ranked and unranked game modes.

Wreak havoc and destroy your enemies in fast-paced, brutal online brawls. Work with your teammates to gain an advantage in a game that rewards technique and timing. Use the environment, power up your fighter’s weapons and abilities, and customize your looks to terrify your opponents.


Wage medieval war against your enemies and lead thousands of soldiers to victory in large-scale battles. As the general, set formations, choose units, and plan according to the environment and your opponent’s strengths and weaknesses. Fight as historic heroes, battle across multiple terrains, utilize the weather, and build your kingdom to change the course of history.


Take your place in a brutal war between the three factions of Ork, Space Marine, and Eldar. Destroy your enemies in large-scale battles, utilizing massive war machines, elite squads, and dynamic terrain. Customize your army, dominate in multiplayer game modes, and devastate your rivals across the three-faction campaign.


Dominate the land and air on massive hand-crafted battlefields with vehicles from the WW2 and modern era. Smash your opponents in fast-paced real-time online battles, and control your units from a birds-eye view or go closer for a more micro-management style. Secure the victory through communication, teamwork, and strategy.


Fight in 3v3 battle royale matches and dominate your opponents with strategy and teamwork. Select from melee fighters, casters, and ranged fighters, and use skills and combos to earn the victory. Compete in online arenas in tournaments and earn cash, special cosmetics, and exclusive rewards.

Play as a gladiator and become a legend in the arena. Customize your gladiator with almost 100 items, fight across multiple arenas, and earn the title of Grand Master through brutal combat. The game features drop-in drop-out co-op, an endless mode, online leaderboards, and the APOCALYMPICS for the ultimate challenge.

What is a MOBA Game?

A multiplayer online battle arena (MOBA) is a video game in which two teams battle in real-time to destroy the other’s base first. 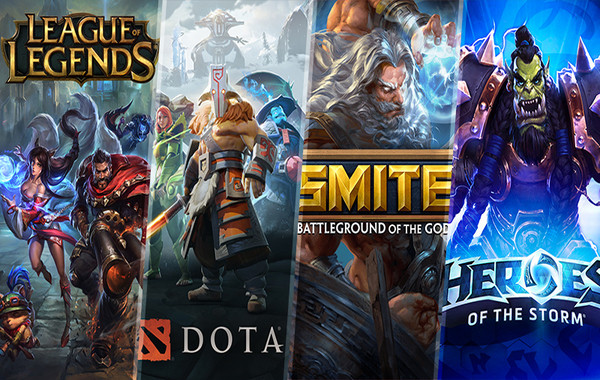 In a MOBA, players control a single character, with each having a class and unique abilities.

Players battle across multiple lanes, with towers placed in each. A team must destroy all the towers in a lane before they can attack the enemy base.

During a match, players earn experience, currency, and levels by defeating creep, towers, and enemy players.

Why Are We Doing a Top 15 MOBA Games List?

MOBA Games are available at incredible prices, but with so many to choose from, we want to help you pick the game that’s right for you.