15 of the Best Battle Royale Games and Compare Prices

“You want to play a Battle Royale Games, but don’t know which one to choose?

Luckily Allkeyshop is here to help you with this top 15 of the best Battle Royale Games!”

Trip your way to victory in this colorful and whacky free-for-all party game. Battle through obstacles, shove your opponents and defy physics as you laugh your way through 60 player arenas to become the victor. Customize your Fall Guy, compete in chaotic free-for-alls, and bounce your way through cooperative challenges, all in the name of fun.

Parachute into the online multiplayer battle royale game that set the standard for the genre and fight for survival in arenas supporting up to 100 players. The game was developed by Brendan “PlayerUnknown” Greene, who was inspired by films such as Battle Royale and The Hunger Games. He had previous experience developing the Battle Royale mod for Arma 2 and 3 and then working on H1Z1: King of the Hill. In December 2017, the game peaked at 3,106,258 concurrent players, beating its previous record of just over 1,000,000 set in the September of that year by more than double. The game is now available on all platforms and was released for mobile, named simply as PUBG Mobile, worldwide on March 19th, 2018.


Blazing Sails is a unique battle royale where intense battles take place at sea and on land. Play aggressive as dying isn’t the end, with defeat only coming when your ship finally sinks. Search the land for treasures, assign your crew to jobs, work together to keep the water out the ship, and wield the ultimate pirate weapons as you storm your enemy’s ship and send them to Davey Jones’ Footlocker.

Worms Rumble lets you play Worms like never before. Get ready for intense, arena-based combat with 32 players aiming for the number 1 spot. Take on the Deathmatch or Last Worm Standing modes using various fan-favorite weapons plus some new additions. Customize your worm and join challenges and seasonal events in The Lab.


Soldat 2 recreates the basic gameplay experience from the original Soldat, with the addition of fresh and enhanced content. Take down other players in 2D battles using an array of weapons and military equipment. Features online multiplayer with different game modes: Capture the Flag, Point Capture, and Battle Royale.

Fear the Wolves is a brutal FPS battle royale set in Chernobyl. As one of the survivors aiming for the sole spot in the extraction helicopter, you have to fight to make sure that spot becomes yours. Radiation is your enemy as it spreads from area to area, but with the right gear, you might just survive it. Use different weapons and artifacts to change your gameplay experience. Make your way to the extraction area and finish the match in style.

Dive into a new battle royale experience in Last Tide. Survive in shark-infested waters as you take down other players who are also out competing for bounty points. Equip yourself with powerful aquatic equipment including Chum Grenades, Grappling Hooks, and more.

Call of Duty returns with the biggest title in the franchise yet, featuring a stunning new single-player campaign and a fast-paced reward-driven multiplayer experience. Customize your loadouts, choose from over 50 weapons, including knives, pistol, submachine guns, rocket launchers, and sniper rifles, and fight for dominance across dozens of maps and several game modes. Warzone offers a new battle royale mode for the CoD franchise, dropping 150 players into a fight for survival.

Drop to the ground and loot, shoot, and survive in this fast-paced team-based battle royale from Respawn Entertainment. Select from over a dozen unique Legends, each with unique abilities, and search for loot, including weapons, shield, and ammo, as you fight to survive against 19 other squads to be the last one standing. Play across six game modes, including Duos, Apex, and Ranked Leagues, and level up your characters to earn in-game drops such as weapon and character skins, and unique banners.


Escape from disaster in Ring of Elysium. Your aim is to board the rescue helicopter, but you must survive and fight your way through the disaster. The competition is tough as other players are also out there with the same goal.


Take on fast-paced battle royale matches in ANAREA Battle Royale. You and other players are randomly spawned in a map that is smaller as compared to other battle royale games. Skill and aggressive gameplay are your best bets to become the victor.

Be the last one to survive in Rules of Survival. You are one of 300 players who are air-dropped into a deserted island. Unarmed, you must race against other players to equip yourself. As your safe zone gets smaller over time, you are at risk of getting killed by poison gas, and also other survivors out to get the winning spot.


Fight with squad to survive ’til the end in POPULATION: ONE, a VR battle royale game. Experience freedom and mobility in its unique Vertical Combat System. Climb on anything and gain advantage on high ground. Use your environment to your advantage, and fight anywhere!


Discover warfare from years gone with Totally Accurate Battle Simulator, a physics-based tactics game that puts you in control of historical units in whacky simulations. Smash through the campaign, or sit back and enjoy the craziness in the sandbox mode. Create and share your battles with Steam Workshop.

What is a Battle Royale Game?

A battle royale is an online PvP, fast-paced multiplayer game where players fight to be the last one standing when the match ends. 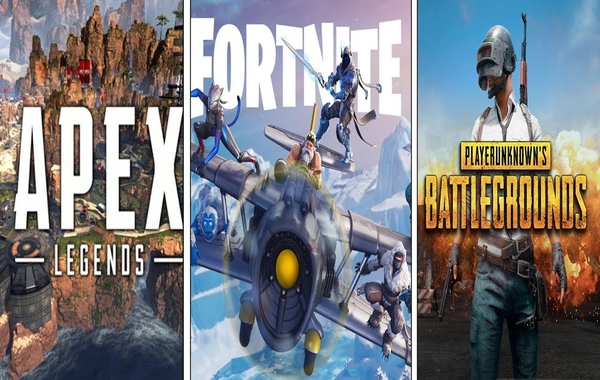 All players begin the match with the same weapons and equipment and must loot and scavenge areas around the map to find better gear. Items spawn at random locations every match.

Players commonly have only one life and are eliminated from the match once killed, although they can be revived by a teammate if playing in duos or squad-based matches.

Within the match, there is often a single designated area that continually reduces in size as time progresses, forcing players into smaller and smaller zones to force action and conflict. Being outside the zone will quickly kill any players.

Why Are We Doing a Top 15 Battle Royale Games List?

Battle Royale Games are available at incredible prices, but with so many to choose from, we want to help you pick the game that’s right for you.