Top Game Releases for May 2020 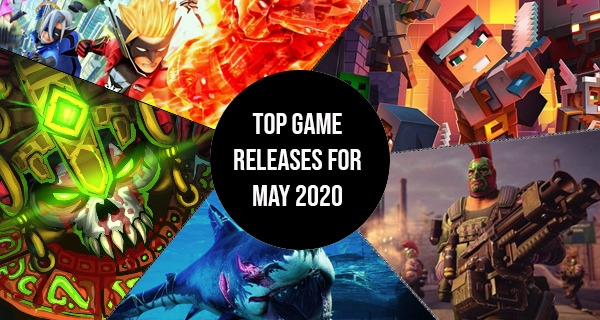 The past few months were unfavorable for the whole world, and just recently for the gaming world as well because of the novel coronavirus outbreak. People are recommended to self-isolate and stay at home so that the virus would not spread. Because of this, a lot of companies opted to a work from home setting, which is not really optimal and can only get some of work done.

Due to the virus, we only have a few Top Game Releases for May 2020 as some of the games were delayed to a later date. Heading your way this month is a roguelite action-platformer, two remastered action-adventures, and action-RPG and a dungeon crawler!

Top Game Releases for May 2020

Five years in the making, this mix of modern roguelite platformers and old-school platformer shooters by Awesome Games Studio will have players exploring the pages of a living comic book. Find out why author John Kowalsky is having a creativity crisis and help him cope with it.

Offering two modes – Easy and Hard. Play by yourself or with a friend in local co-op. Customize your appearance as well as your hero’s skills to match your preferred playstyle. Overcome all 40 bosses while the epic soundtrack of Adam Skorupa and Krzysztof Wierzynkiewkz plays in the background.

Protect the earth from the ruthless alien invaders as a part of the Wonderful Ones. The original game launched seven years ago for the Nintendo Wii U and the remastered version will be coming to the Nintendo Switch, PlayStation 4 and PC via Steam.

Players can expect additional amazing extras in this remastered version, so do your best to save Blossom City from all the extraterrestrial threats.

The action role-playing game Maneater will be biting its way to the PC, PlayStation 4 and Xbox One come May 22, 2020. Experience how it is to be one of the most terrifying predators in the oceans – the Shark! You will start as a defenseless shark pup trying to survive the harsh world and then grow into the frightening predator that you are. Your enemies will vary from wildlife to even humans. This may very well be the best shark game there is.

SAINTS ROW THE THIRD REMASTERED | MAY 22

The second big remaster in our list arriving this May is Saints Row The Third which is now looking better than ever! This is the time that the Third Street Saints are at the height of their power. They are yours to control as well as the city. Your rules will be followed.

Available for PC, PlayStation 4, and Xbox One, the game will come with all three mission packs and more than 30 DLC items.

This is one game that fans of the first game are surely waiting for! Although it is completely different, Minecraft Dungeons is still set in the Minecraft Universe but now with dungeon crawling mechanics. This all-new action-adventure game will be available for the PC, PlayStation 4, Xbox One, Nintendo Switch, and Xbox Game Pass.

Players will have the choice to go into the dungeons alone or with up to three other friends in an online or in-couch co-op. There are epic quests and a lot of treasure to gather per level! Your goal is to take down the evil Arch-Illager and save the villagers.

These are our Top Game Releases for May 2020! The list of games may be few this month, but fingers crossed there will be more available in the following months. Stay Safe, Stay Healthy, and Wash Your Hands.