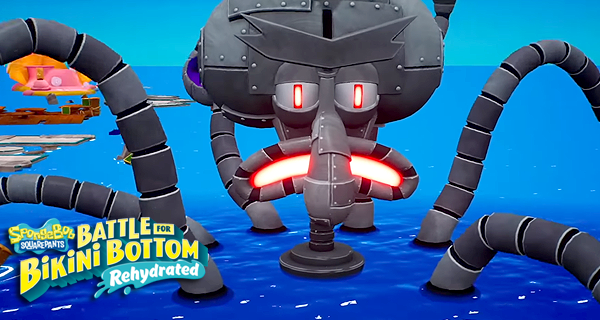 THQ Nordic recently released a brand new trailer for SpongeBob SquarePants: Battle for Bikini Bottom Rehydrated introducing the new multiplayer feature that has been added to the game.

According to the developer, this feature is available in the brand new horde mode where you can merge forces with your friend in an effort to defeat the evil Robo-Squidward. You may collaborate online or share a screen in couch co-op as both versions are available.

In addition, the multiplayer has 26 beautiful islands that provide a sense of adventure as each is unique in its own way. Speaking of uniqueness, the multiplayer also consists of 7 playable characters that are all equipped with unique attacks. These attacks influence the strategies you employ and the general playstyle you adopt with each character. Bear in mind that some attacks are more viable that some, depending on the island you are on.

The trailer spanned just under a minute but lasted long enough to provide players with a closer look at the game’s wacky animations and eye-catching environment design. The world is as you would expect; it is playful, light on the eyes, and mirrors much of what you would find in the iconic SpongeBob SquarePants cartoon series. You can watch the trailer below:

All in all, this is a welcomed inclusion in the game and will likely be one of the most appreciated features when SpongeBob SquarePants: Battle for Bikini Bottom – Rehydrated officially releases.

On that note, SpongeBob SquarePants: Battle for Bikini Bottom – Rehydrated is poised for release on June 23, 2020. It will be available for the PlayStation 4, Xbox One, Nintendo Switch, and PC.