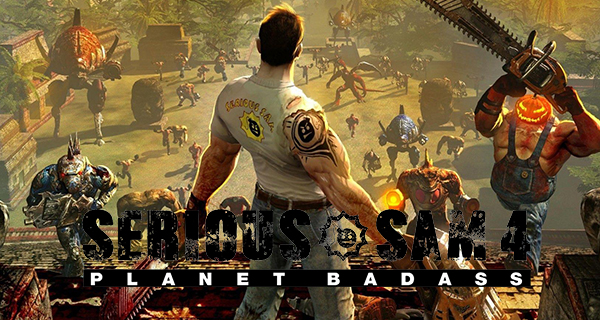 Serious Sam 4 is just around the corner, and to continue the hype, developers Croteam has released a new trailer that shows off more gameplay.

Narrated by the series protagonist, Sam Stone, the latest Serious Sam 4 trailer shows Earth to be in ruins, destroyed by Mental’s army.

Sam Stone is full of his usual charm, spitting Duke Nukem-inspired dialogue, before the trailer launches into a heavy metal montage of heavy music, large weapons, and plenty of blood-spilling explosions.

Croteam has already promised Serious Sam 4 will feature many of the fan-favorite weapons and enemies, as well as new ones, but the trailer has no desert in sight, meaning that perhaps the days of panic-filled murder whilst defending sand dunes may be over for the series.

Going off the new trailer it is clear to see that Croteam has kept the latest title firmly rooted in the ground built by the first three games, which is witty dialogue, big weapons, brutal kills, and endless enemies determined to overwhelm and destroy Sam Stone.

The game’s Steam Store page describes the game as “a high-powered prequel to the Serious Sam series that scales up chaos to unprecedented levels.”

Serious Sam 4 will be playable solo, or co-op with up to 4-player support, allowing players to join together to take down the horde of Mental’s invaders, including the Scrapjack, Werebull, and new Processed.

The game features a new Legion system, allowing the game to generate battlefields that support thousands of enemies, meaning more explosions, gore, and action than has seen before in the Serious Sam franchise.

Serious Sam 4 has no set release date as of yet, but will hopefully launch in August 2020, and will be available for PC.

Bit weird the developers are hyping up the Stadia version on Serious Sam 4, but at least it is still available on PC.

Looks very similar to Doom Eternal. I never played the previous Serious Sam games before but this one might be a good game to start with.