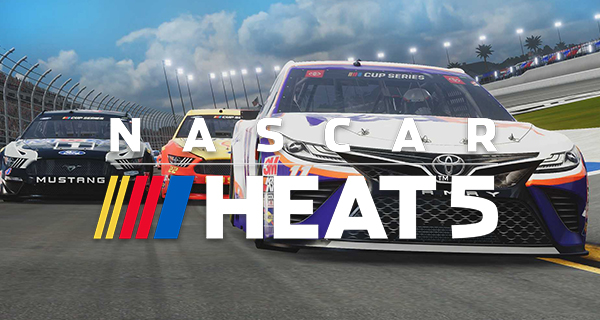 NASCAR Heat 5 has launched and below we go through a few of the reviews for the game so that you know what to expect.

NASCAR Heat 5 features the same modes you would expect from the series, however, it does have a few extra modes that are introduced with this latest title.

Test Session will allow players to test and work on their car’s setup on any track offered in the game. Working on your car will be essential to the success of your career and the game allows players to carry their setups from Test Session over to the other game modes on offer.

Online Challenges offers a weekly challenge, pushing players to the limit as they compare their results against other players.

Players will most likely spend most of their time in Career Mode, working their way up from dirt racing to the NASCA Championship, and Brian Mazique of Forbes says, “There’s so much racing and battling for points and standings, that you’ll almost certainly remain interested.”

It seems NASCAR Heat 5 has fixed the problems that steering wheels had when being used for previous titles, meaning players can feel the track underneath them, particularly if they have force feedback enabled steering wheel.

Realism is something all of us, including developers, want in our games as we gamers push the boundaries of video games and reality. However, NASCAR Heat 5, though it does see some damage to cars, does not feature a realistic damage model. Which is a shame, as Robert Kollars, from Operation Sports says, “Watching the frame of a car crumple and disintegrate in a real cup race can be amazing and horrifying all at once.”

Instead of having a car that falls apart, there will be minor dents and damage done to the cars throughout the race, but nothing too serious that you could potentially see in real NASCAR.

Racing in NASCAR Heat 5 has seen an upgrade with improvements in the AI, with Michael Straw, writing for Sports Gamers Online, saying, “Instead of an increase just meaning the AI performs in a way that defies logic, the AI drivers become smarter on the track with blocking, drafting, pit strategies, and more.”

It seems NASCAR Heat 5, although offers improvements in the AI, and a few additions to game modes, doesn’t change the formula when it comes to being out on the track, which isn’t necessarily a bad thing.

Robert Kollars finishes his article by saying, “The career mode is deep and fun, and when I add in the online options, season options, newly tweaked paint booth, and new user interface, I’m mostly satisfied.”

Brian Mazique sums up his review by stating, “The play is so much fun, it helps to compensate for some of the presentation issues, and what I’d describe as a lack of creativity in other areas. Those issues prevent the game from being great.”

Michael Straw is delighted with the final product, saying, “There’s plenty that the game could’ve benefited from, but for a curtain call installment, NASCAR Heat 5 is the best offering of the series to date and will keep you coming back for its gameplay alone”