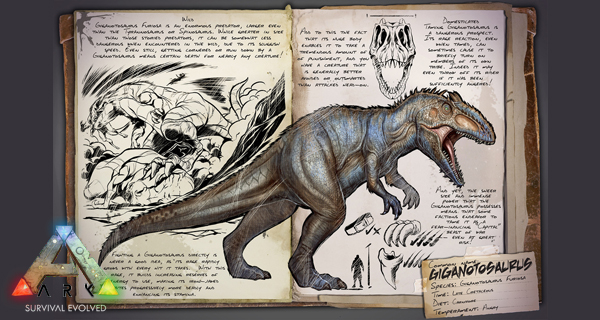 The colossal Giganotosaurus (straight out of Jurassic World) will be included in the game’s latest update on Steam.

This “Super” Dinosaur, almost 2 or 3 times the size of a T-Rex, is capable of destroying your base and its contents in two shots!

“While greater in size than most large predators, the Giganotosaurus is sometimes less dangerous when encountered in the wild, due to its sluggish speed. Even still, getting trapped or chased down by a Giganotosaurus often means certain death for nearly any creature,” the post said

Check out this awesome video highlighting this ultra-mega dino: The addition of the Giganotosaurus is not accepted unanimously, as some players find it too extreme while others think the mega dino has its own place in the game. Ark Survival Evolved is available at the best price via digital download and is easily activated via the Steam platform. It is an action-adventure-survival game brought to you by Studio Wildcard.

i would like to try this game (just after trying sc2 lotv), it looks pretty nice

Hi. My friend got this game and he say that is good maybe little bugs but that is ok 😀