Is Your PC Ready for the Star Wars Battlefront Beta? 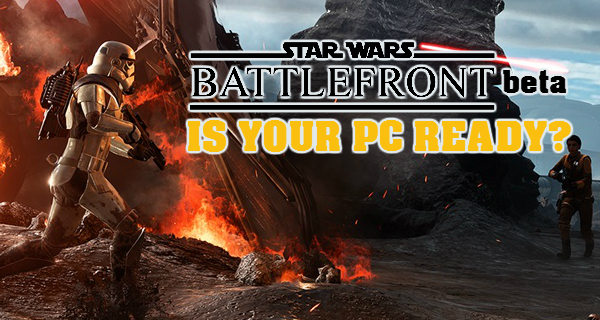 Gear up as the most-awaited Star Wars Battlefront Beta is coming to us on October 8th!

If you are one of those looking forward to the Star Wars Battlefront Beta, you won’t have to wait any longer. In a blog post last September 24th, EA has officially announced that the Beta is set to run starting October 8th and will end on October 12th. This is for Xbox One, PS4, and PC (via Origin) players. You can start pre-loading the Beta on Origin (for PC players) as early as October 7th beginning at 1am PT/10am CET.     The blog post also mentioned information on where players can find the Beta on their respective platforms. “For PlayStation 4, the Beta will be available in the PSN Store. For Xbox One, players can find it in the Xbox Live Marketplace. On Origin for PC, it will be under the Demo & Betas section of the Origin store,” it said. The Star Wars Battlefront Beta download size, on the other hand will be around 7GB for PS4 and Xbox One, while it will be around 11GB for PC via Origin.

Important Things To Remember During the Beta

The Star Wars Battlefront Beta is open to everyone, so there won’t be any need to register. However, you need an EA account at www.StarWarsBattlefront.com to be able to download it. There are three game modes available in the Beta: the Walker Assault on Hoth, Drop Zone on Sullust, and Survival Mission on Tatooine. The level cap is only up to Level 5. Though you will no longer advance to a higher level, you will still be able to unlock items during the Beta. Your Beta stats and game progression won’t be carried over once the game is officially launched. You will need a persistent internet connection, and your Origin account to be actively online while on Beta.   So are you all excited for the Star Wars Battlefront Beta? We are! Let us know your thoughts below!

This site is the best for gamers , thanks for allkeyshop

Great! Ready to pre-load it on October 7th! I hope it will be awesome! 😀