There is no doubt that over the years, gamers have figured out they can just eat chips, cereals, chicken nuggets or anything really either in a mug or with chopsticks to avoid getting grease or crumbs on their gear. But some companies took it a bit further with these ingenious “inventions.”

Whether it’d be quick or days on end gaming, snacking has always been part of any gamer’s life. While there are snacks out there that are a lot less messy than the others, the top spot still and always will go to CHIPS: the greasy, cheesy, crunchy, and never-gets-too-old-to-eat kind of food. Some gamers just pour the bag of chips into their mouth. And some eat a few (or devour the whole bag) then wipe it in their clothes or some wet wipes. But then, this is tricky. 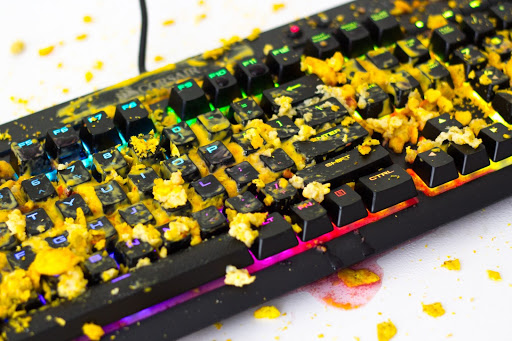 Pouring would mean some bits might fall into your keyboard and quick “washing” or wiping of hands does not entirely get rid of the grease. Before you know it, you’ll have one sticky controller in your hands. The best way, but unlikely to happen, is to have someone feed you whenever you want! Pringles, however, did come up with a headset that can literally just do that. Well kind of, since reviews were not that stellar. Anyway, here’s a list of these ingenious inventions that can help you snack without messing up gaming gear. In late 2019, Pringles had given Engadget and a few Twitch streamers to test their “self-feeding” headset while playing Gears 5. They basically 3D printed the tube parts and attached it to a Razer headset. The whole idea was that you can fill Pringles chips in a tube on one side and then press the button on the other side so the chips will fall into a mechanical arm that goes in front of your mouth. The concept was pretty cool however, it did not always work as intended. There were times that no chips came down the tube and the arm still feeds you which is awkward and distracting. Then sometimes it gets frustrating because you struggle getting the chips but then the arm goes back under the tube without you even successfully eating it…leaving you hungry and confused. All in all, the idea is there but the design needs polishing. Unfortunately, no polishing has been made since the promotional stunt because the only way to buy this as of now is to get the prototypes from Engadget and the Twitch streamers. But then again, they only 3D printed the tube parts. So if you have a 3D printer, you can just print one for yourself and make different mechanisms for Doritos or Cheetos. You may find Engadget’s full review here. This PlayStation chip picker was never officially for sale. Apparently it came free with PlayStation4 purchases in Hong Kong. The original chip picker which came from Japan though, called Potechi no Te, can still be seen for sale online or in novelty stores. Based on an infomercial, it has a no-crunch mechanism so it’s perfect for grabbing chips. There is an updated version of this that doubles as a stylus on the other end. Currently out of stock but when it does, you may purchase one on Japan Trend Shop. Japan knows no boundaries indeed! Just a side note, this could be an awesome gadget when you’re hungry but your hands start to sweat from the suspense of The Medium. 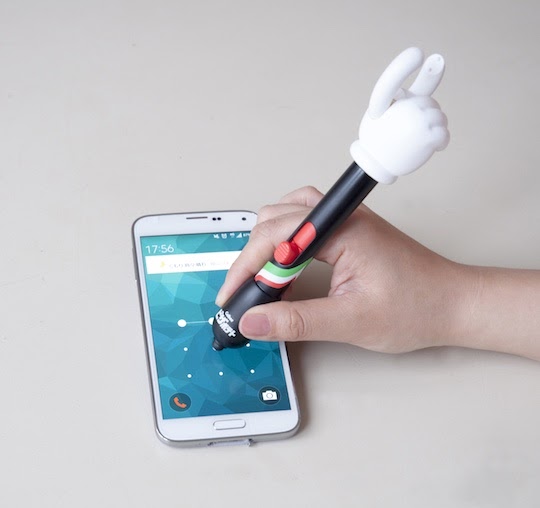 This clever and fun invention made some news during a promotional campaign for Popcorn Indiana in 2012. Unfortunately due to some tech issues, it never got released in the market. This innovative device is basically a voice-activated popcorn launcher. It has the technology to track where the “Pop” voice command was set and launches a popcorn directly to that location. Now this is the perfect feeder because you do not have to do anything mid game; you just have to say pop and open your mouth…well of course unless you’ve finished all the popcorn inside and have to refill it. This is perfect for playing any of the Top 15 Singleplayer video games as you might be saying pop too much! 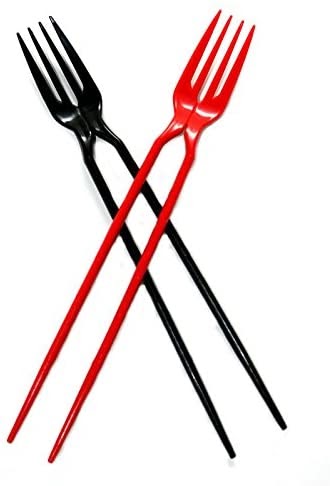 First came the spork and now came the chork! This combination of chopsticks and fork made headlines when Panda Express started giving this out with their takeaway boxes in 2016. This makes perfect sense for a chinese-inspired food establishment and more so to gamers who do not want to touch their food while gaming. Chopsticks and forks have been around gamers as their chosen device to consume. So why not combine both and have just one in your gaming table. Whether it’s to pick or to stick chicken nuggets, it does the job perfectly. This is currently for sale in packs of 12 or 24 in The Chork’s official shop. Late last year, Burger King Singapore did an exceptional promotion with it’s Whooper burger. When you purchase one through their BK App, you get a chance to win Xbox Game Pass Ultimate 3-month Subscription and an Xbox-Royale Ergonomics Gaming Chair. This year, the fastfood giant went further. Lo and behold, The King’s Throne. This ingenious gaming chair has an anti-cramp hand rest which has a built-in foldable tray on one side and a self-cooling anti-slip cup holder on the other. It has massage cushions for your Red Dead Redemption 2 gaming sessions and RGB Led strips for the next level gaming experience.

So all of that any gaming chair manufacturer can do. What makes this extra special is the Whooper experience that comes with it. It has a Burger King button that automatically puts in your order. Then the chair will buzz when your order is near through a vibrating notification system that makes use of GPS tracking. So the previous inventions made eating easier and mess free while this one makes getting food as easy as breathing. Unfortunately, it is not officially out in the market but few streamers have been given The King’s Throne to test out. For us commoners, we can challenge these streamers in a Battle Royale tournament to win the throne. Unclear if the winning comes with the chair but the ad says 1 year of free Whooper which is not bad. Not bad at all. 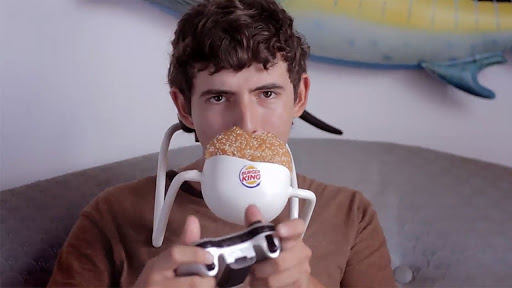 Burger King did not only do the Xbox contest and the high-tech gaming chair, it also did hands-free burger holders. Incredible idea but unfortunately, it was all an advertising campaign. Apart from the ones used in the promotion, this hands-free mess-free snacking device is not publicly for sale. But since the design is so simple, just have one 3D printed or engineer something that resembles this. 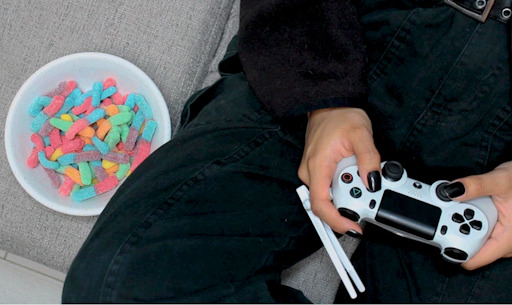 Snactiv is basically if PlayStation chip picker and the Chork had a baby. Inoobi design company started this project last month with a kickstarter page and now has gone live for pre orders at $13 a piece. You can also buy one with a case for an additional $4. Now that’s a portable, hygienic, and hands-free accessory for everyone who loves to snack but hates to stop in the middle of a game. According to the Snactiv website, even Elon Musk has already tried it. This list cannot end without this hat. Okay it has been around a while but still, the brilliant mind behind this will always go down a genius. Gaming is like any other sport, you have to stay hydrated. Drinking water or any other beverage for that matter is not messy but if you can do it hands free, why the heck not. Lodge in your water bottle, energy drink, or since we are in a snacking list, your protein shake and you’re all set! You may get one for as low as £6.50 at The Beer Bong. Some trivia